Cooking with my Boys

I am a working mother.  It is something that I am deeply proud of.  But it is also something that is deeply painful. Every weekday morning, I wake up earlier than I’d like so I have enough time to put my makeup on, curl my hair, and get dressed–all while making the boys breakfast, convincing the boys to use the potty, and breaking up fights on who gets to sit on the side of the sink that’s closer to mom.  Most days, I am not as put together as I’d like.  But that doesn’t bother me.  What bothers me is that I leave behind two boys screaming for me to stay with them for just a couple more minutes.  To hold them forever. It breaks my heart.

The boys spend their weekdays with our nanny.  A wonderful woman who gets to shape and mold my boys.  She gets to take them to story times. To the zoo. Museums.  The three of them get to have inside jokes that I will never understand.  There are entire story lines that I am not a part of.  It creates a feeling of emptiness that is unquantifiable.

But I love working.  I love being a lawyer. When I was in elementary school, I made the decision that I would be a lawyer someday.  Actually, I wanted to be the first female United States President.  The fact that a woman has never been elected as president has bothered me since as early as I can remember.  So I figured, why not be the person to change it? And modern day presidents go to law school (present president excluded) so that’s what I did.

I get to spend my day working as a lawyer challenging myself–working through litigation strategy, finding pragmatic solutions, and providing advice to those who rely on my expertise. Sure, my days of dreaming for the presidency is behind me, but I still find myself in a male-dominated field where my gender has played a defining role in my career in ways my male colleagues will never understand.  So I still get to work on defying gender stereotypes in a small way. And as a mother of two boys, it makes it easier to leave them every day knowing that my work may make a small difference in the future of how women are seen in the workforce, at least in their eyes. Certainly, someday in the future, if a female says she works at a law firm to one of my sons, the first question out of my boy’s mouth won’t be, “oh, are you a paralegal/secretary?”

In a similar vein, I want my boys to have life skills that traditionally wouldn’t be pressed upon little boys.  My boys will know how to cook. 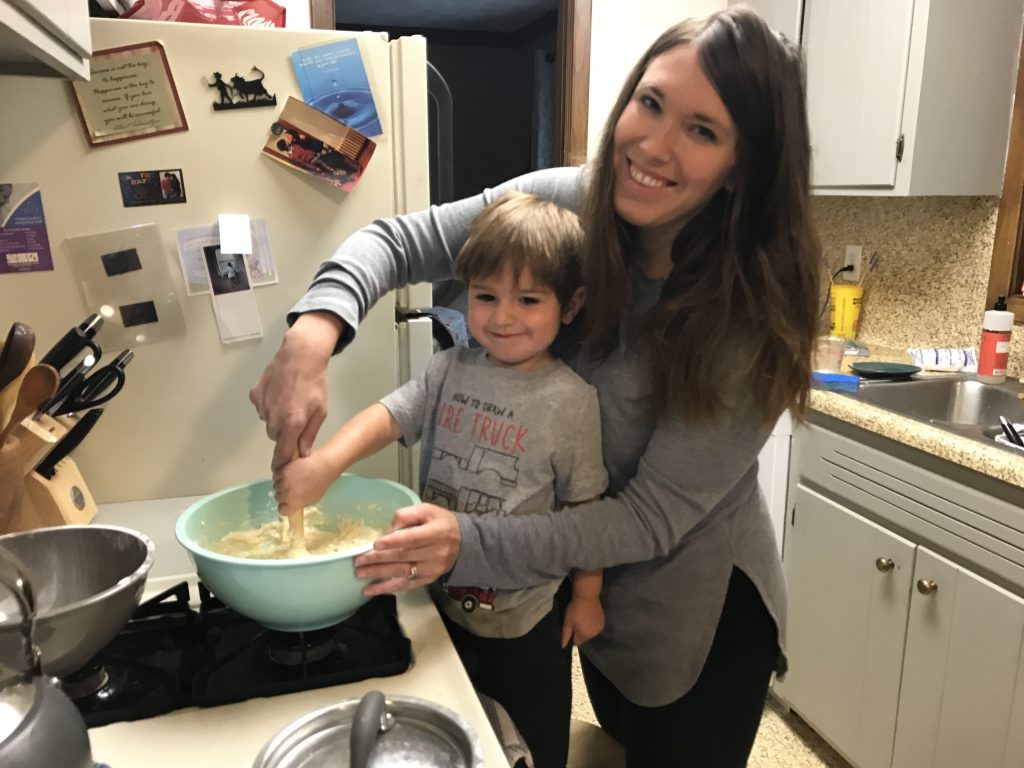 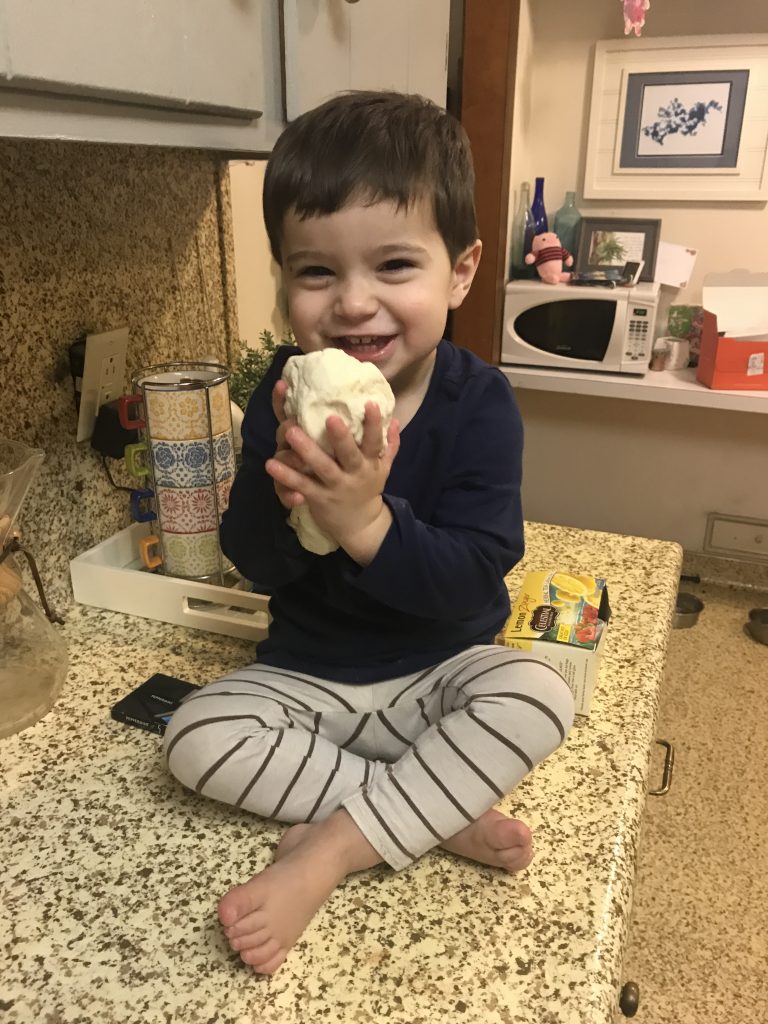 I’m not a great cook.  I’m not even a good cook.  But that really doesn’t matter. Teaching the boys to cook while I learn to cook means we get to spend quality time together.  It is our thing.  On Saturday or Sunday afternoons, I’ll look up a various recipe for us to experiment with. We’ll go to the grocery store to pick up the ingredients.  JR will want to buy everything in the store.  Max will want all the food to be touching him in the cart.  We’ll head home and unpack the groceries.  The boys will eat the entire carton of berries before they make it to the fridge.  Then, the boys will pull up a stool to the counter, and we’ll start to cook.

Since the boys are still young, I cut and measure.  They pour and stir. 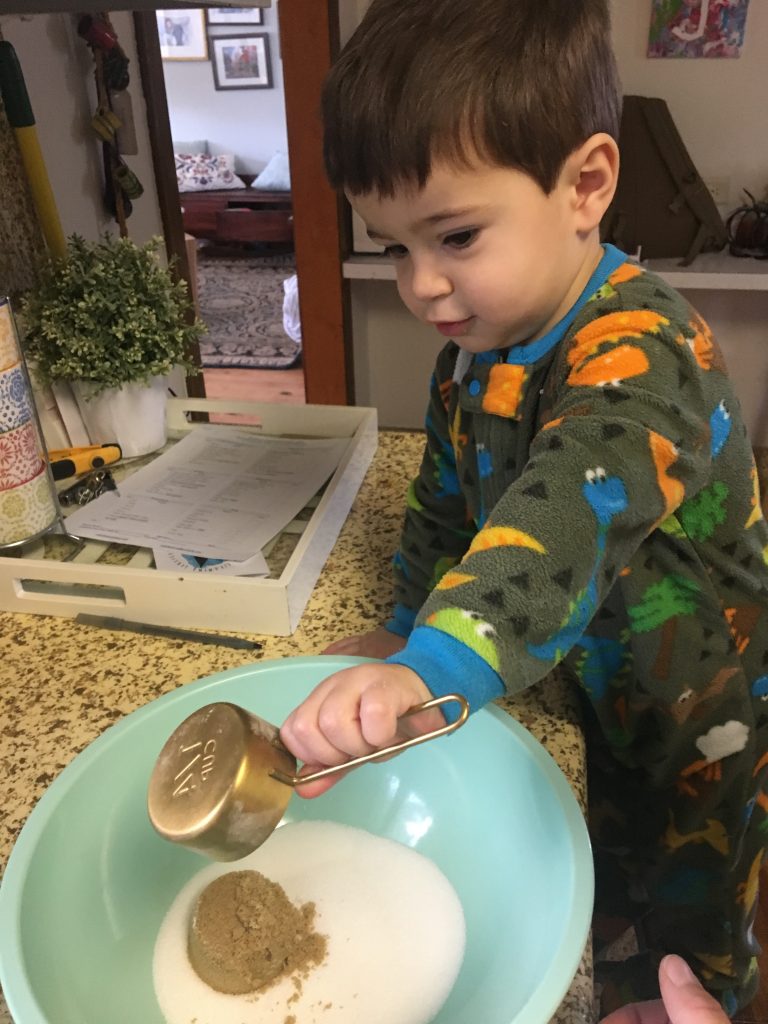 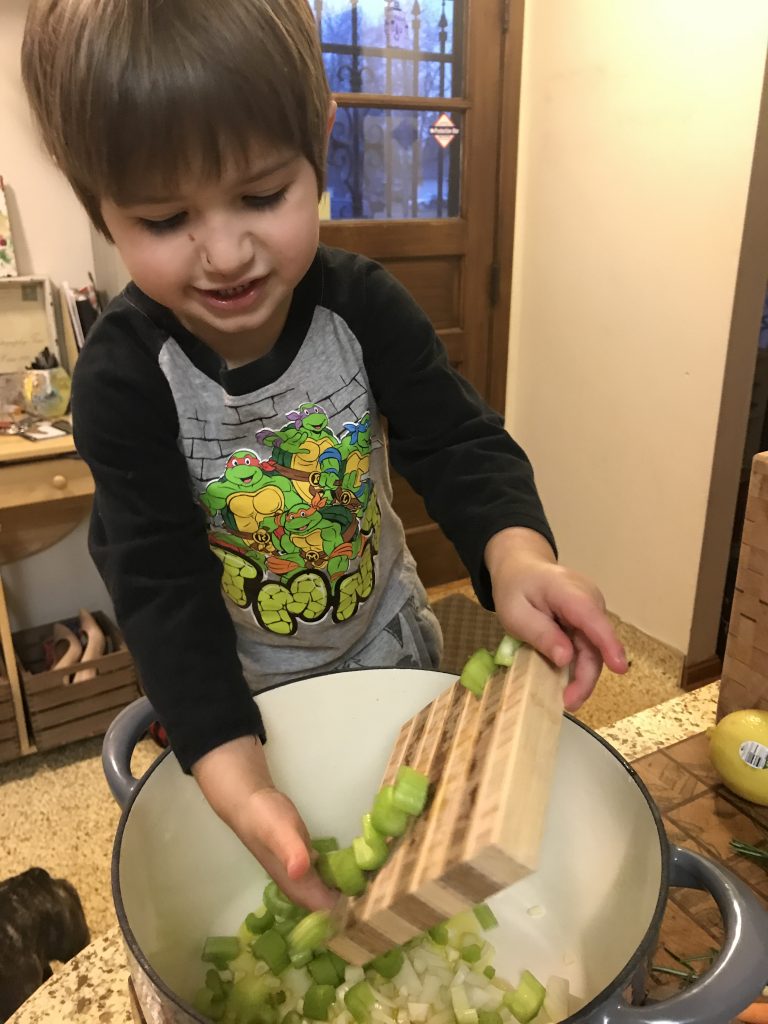 Through our cooking adventures, the boys have s l o w l y learned to be better listeners.  That we cannot rush through steps.  That even though we want to toss in an extra cup of sugar, we probably shouldn’t.  That they can make a meal for their loved ones, not in spite of the fact that they are boys, but because they love to cook.

I may not be there during the weekday to take the boys to story time.  But I will be the person who will teach JR and Maxie how to make sugar cookies, pasta sauce, dice veggies, and delegate the duty of making rice to someone else (because I refuse to make rice).  And hopefully, I’ll play a small part in teaching the boys that there is no such thing as a boy job or a girl job.  There are just jobs.  A mom can be a lawyer, and a dad can be in charge of cooking.  And both are ok. 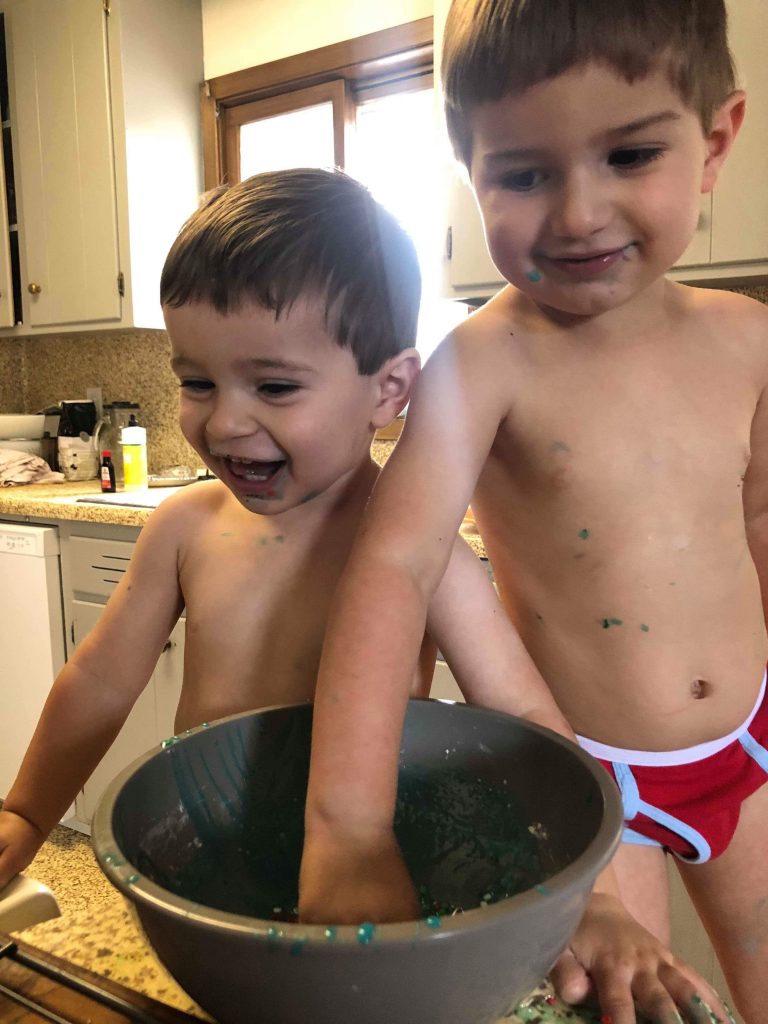 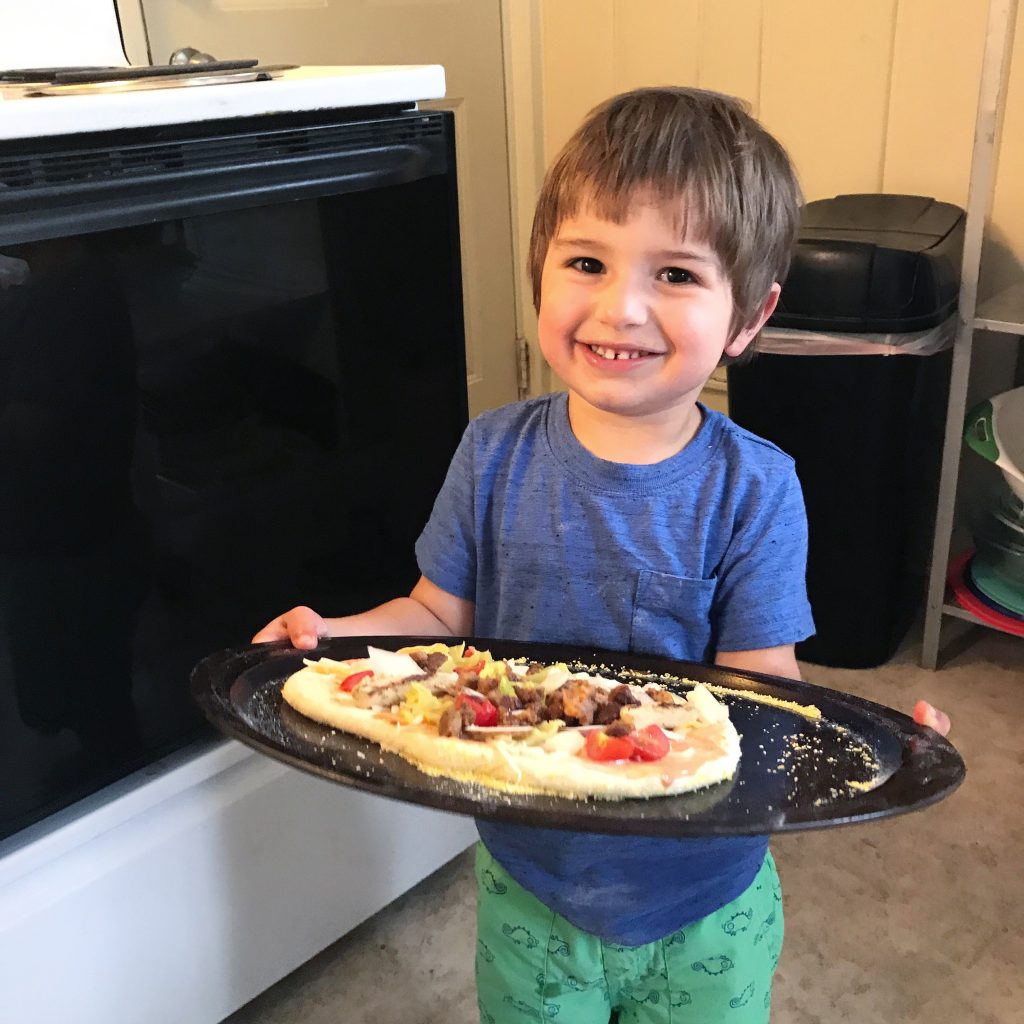 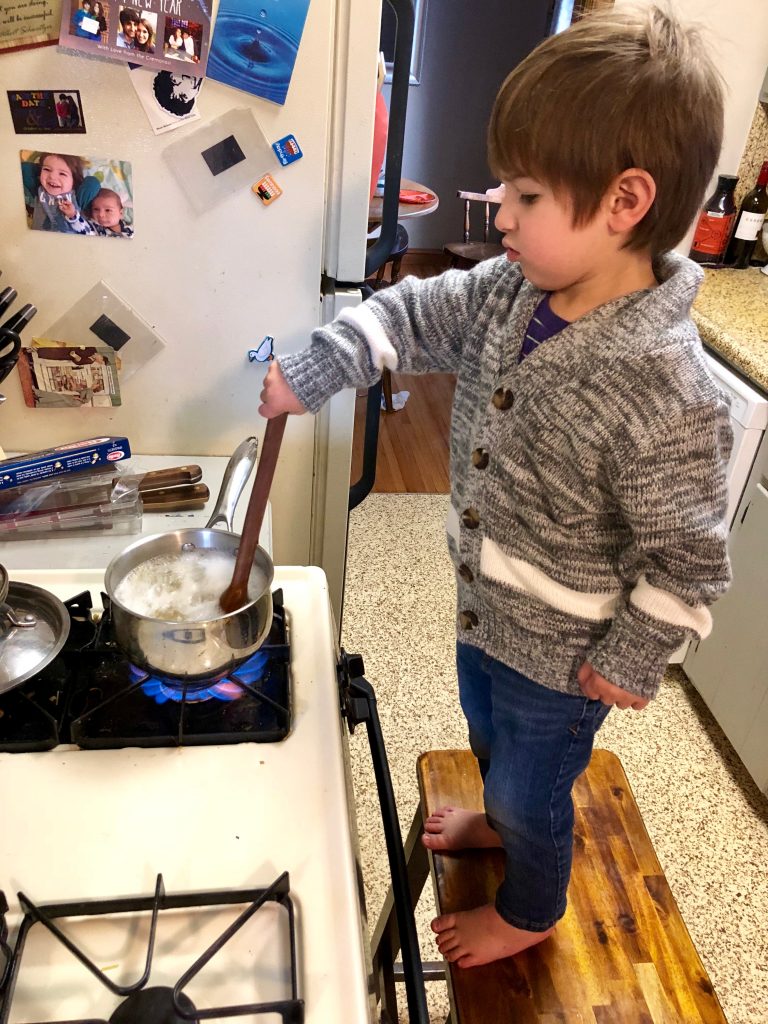 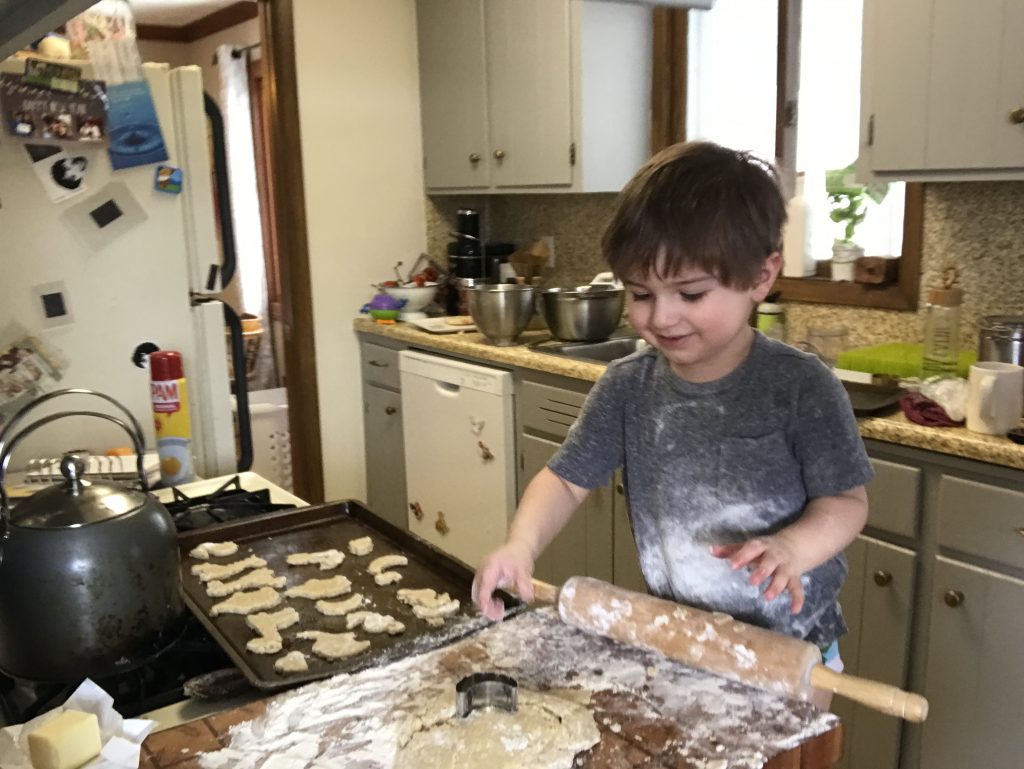 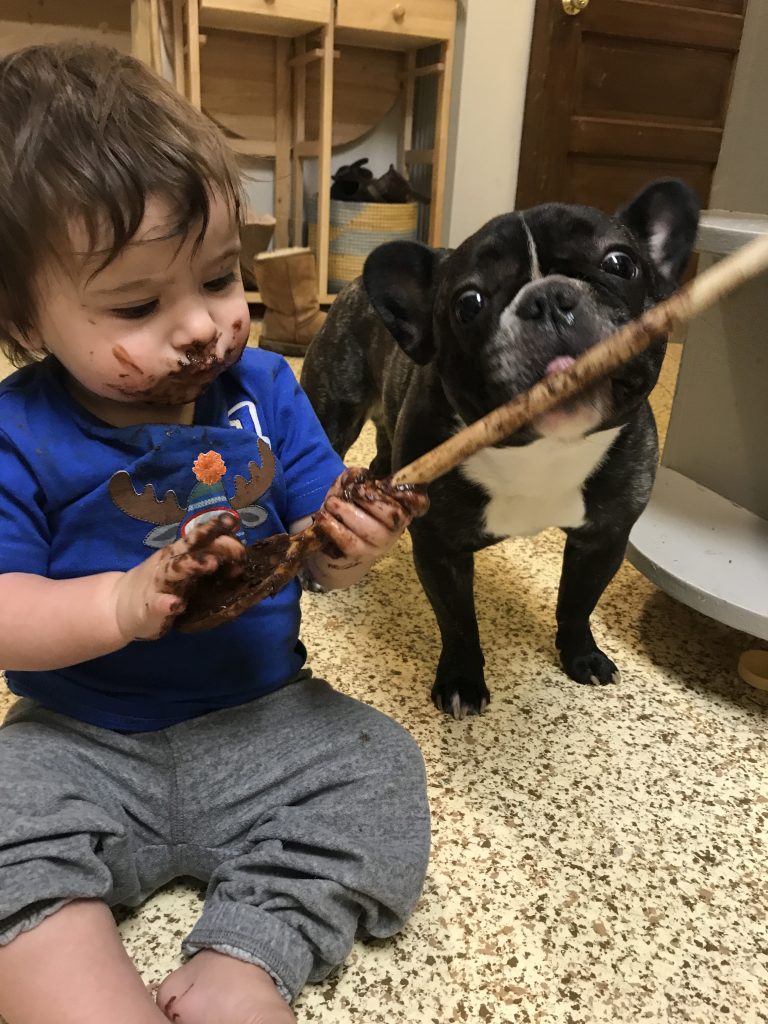 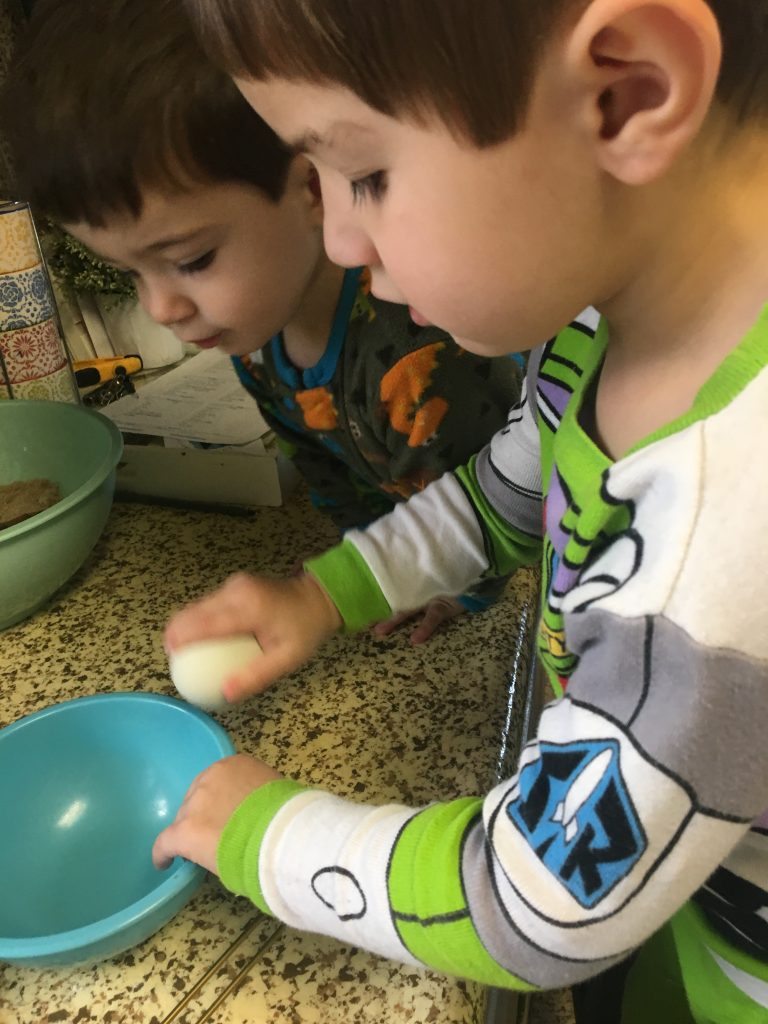