It’s been a while.  Again.  Still been making new recipes.  Still forgetting to take pictures.  I’ve been lazy.

But there is something I have been spending my time taking pictures of.  Surprise! There is a new addition to our family.  Three weeks ago, a little French bulldog moved into our house.  Her name is Pancake.

It’s been an adventure.  Neither of us have owned or trained a dog before so we enrolled into a puppy class.  Pancake is becoming proficient at playing fetch, and she’s great at sitting, but now that she has learned that sitting equals treats, walking on a leash has become more difficult.  She will walk a few steps, sit, and wait for a treat.  It’s only been three weeks so hopefully she will get the hang of it soon.

Our kitchen also has experienced a new milestone.  I finally made something using yeast! I’ve been saying for months that I wanted to learn how to make dough, but every time the opportunity arose, I opted for Pillsbury’s.

This lazy streak has come to an end! Matt is an avid woodworker (the best if you ask me!) and he subscribes to every woodworking show, blog, youtube channel.  One of the woodworkers he follows had a post about making a pizza peel with a recipe for tomato pie which included a homemade crust.  Matt took it as a sign that it was time for me to finally learn to work with yeast.  Clever guy 🙂

I love this tomato pie recipe because of the simplicity of it.  While I love a pizza piled with toppings, sometimes you crave the bare necessities.  Plus, you make this pizza up-side-down.  The cheese is the first topping with the sauce on top.  This unique structure and simple ingredients enhances the flavor of the pizza.  It was the perfect recipe for me to start my journey working with yeast.  And we’ve now made this pizza over 10 times.  I’d say it’s a keeper!  And I now consider myself a “yeast expert.”  Well, as long as it involves this recipe… 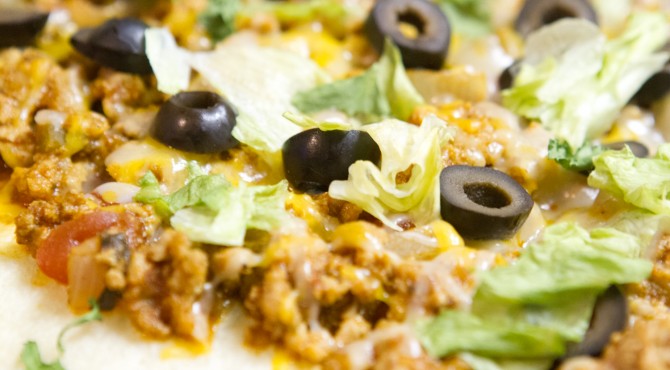 I am starting my second round of p90x.  And this time my focus is on nutrition.  Which is particularly challenging during this holiday season.  But so far so good!  Especially with delicious meals like this taco flatbread pizza! 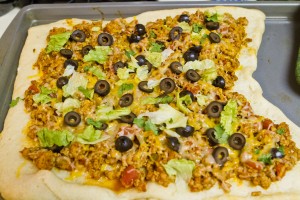 For me, the hardest part of eating healthy is not living alone.  When I lived by myself in law school, healthy eating was never an issue.  I controlled what food was in my fridge and what cluttered my cupboards.  Now as husband and wife, grocery shopping is a team sport.  Since Matt is a woodworker, he is all about the snack food that’s easy and fast to eat–which basically means unhealthy (but delicious) food that is rather hard to resist. 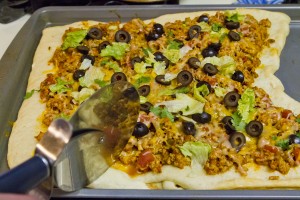 So finding meals that are healthy but still have that snack-like taste can be difficult.  This taco flatbread pizza was an excellent compromise–full of protein, little bit of veggies, and still falls into the pizza family so both Matt and I were happy.  This has definitely made it into our recipe rotation.

Error: API requests are being delayed for this account. New posts will not be retrieved.