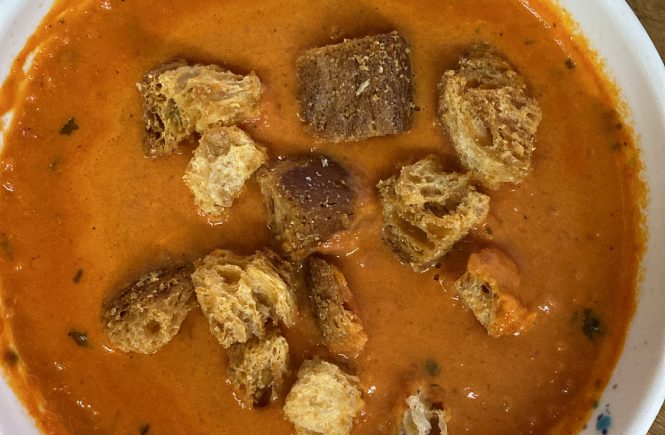 The fall weather is well under swing. But honestly, I don’t need sweater weather to justify making a soup. Soup is a staple around here because it is so gosh dang easy to make on a week day. It counts as an entire meal when all you really did was a make main dish. And with three kids, a full time job, and a husband who thinks he’s done the dishes when he actually only washed 3/4 of the dirty dishes, soup wins.

Slightly modified from: The Modern Proper 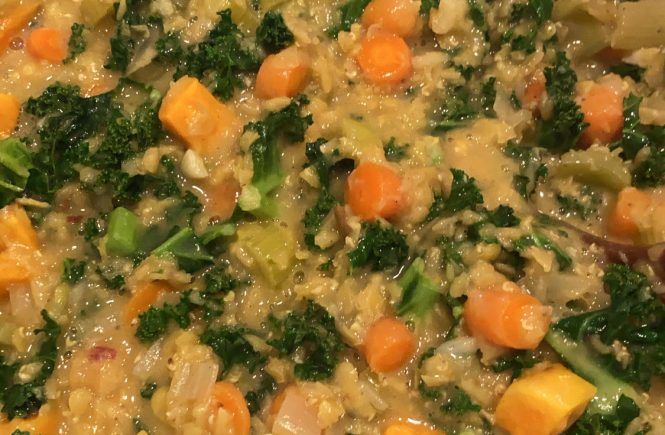 I have a handful of recipes that I am confident they will wow. The recipe that I have a solid grasp on how to make and what to modify to cater to whoever is joining us for dinner. This is one of those meals. When you make it, this is what will happen. Your guest will devour the meal. But after a first couple of spoonfuls, they will look at you and remark, “what is that spice? This is so good, but I cannot place these flavors.”

At this point, you have a couple options. Make them guess (they will probably say curry and you will laugh and shake your head). Say you’ll never tell. Or reveal it is cinnamon, ginger, and cumin. And that this combination smells and tastes heavenly.

But the point is, this is a great soup. It’s easy to make. It’ll impress whoever is at your dinner table. But most importantly, it’s gosh dang delicious.

Like so many other Americans, I spent the day before 4th of July going to the grocery store to stock up on must-haves for grilling out tomorrow. Because there certainly isn’t going to be a holiday where I plan ahead and buy everything we need earlier than the day before 😉

Somehow I came home with a loaf of bread, English muffins, a French baguette, a ciabatta loaf, and a huge, round crusty sourdough. Apparently, carbs will be making a big appearance in our meals the next following weeks.

With that in mind, I tried out this new broccoli toast because I am determined to make sure none of this bread gets moldy before we get a chance to eat it. It was the biggest hit with everyone! Added bonus is it is such a straight forward recipe so it can easily be a weekday dinner. And we typically we have all the ingredients in our fridge. This will be going in our “make again” list.

It was one of those nights where we had a half pound of ground beef and spaghetti squash that needed to be used. And I was in a mood. I didn’t want to follow a recipe too closely or make anything complicated. But I also wanted our meal to taste good. And I don’t typically cook spaghetti squash so I didn’t have an index of past meals to work off of. So I made this. By pretending I was going to make lasagna. Only with spaghetti squash instead of noodles. And soft goat cheese instead of ricotta. And not really layered. So very loosely based on lasagna. But it was so so good.

Simple ingredients always seem to make the best meal. Just let the natural flavors of the real food stand out on its own. That is why I love this soup. The list of ingredients is minimal. There is not much to do it. But the soup has so much flavor and texture. And you are not stuck to the same taste palate. You can top the soup with so many different options to mix it up, all while staying true to the base flavor. This is my new favorite soup.

I have been trying to increase our family’s rotation of meat-free meals, as JR is still a vegetarian (on most days–he cannot say no to bacon). So I have been making more an effort to buy more variety of vegetables. And I really want the kids to have more than just one veggie a week. So I find myself leaving the store with about 5 different kinds of veggies, if not more. But, the boys and Eloise only eat so much. When you have a head of broccoli and cauliflower, it can be tough to eat everything before it starts to turn.

This is a great recipe to get all those vegetables into the mix. The pesto balsamic mix really elevates the dish and is a unique way to change up spaghetti and sauce.

This soup is the absolute best. It is so easy to make. Most people have the ingredients they need on hand in the fridge or pantry already (or you can sub out fairly easily). And it is a fresh take on soups because that Frank’s Red Hot brings the soup to an entirely different level. I love it.

I modified this recipe from an Instagramer that Matt and I met in Italy. We were eating at the same restaurant and had some small talk about posting on Instagram. She was very kind and expressed how she was on her way to being an influencer. And I was a jerk. There is no way to reframe this encounter to make me look good. I was dismissive about her being an influencer for literally no good reason. Which is additionally shitty given my husband is a freaking influencer. And ever since, I look back on that encounter and feel so shameful about how I acted. I was a jerk.

But jokes on me. The next day I realized I was so insensitive and followed her and saw that her posts were legit. I felt so stupid, and I sincerely think about it at least once a month. I am sure my terrible self rolled off her back and she probably has no memory of it. And she has blown up as an influencer. She has some seriously awesome content. Her photos are creative. Her podcast is genuinely helpful for people wanting to get into content creating. She is killing it. What a good, freaking example of not letting the haters get to you!

So yeah, me being a shitty person is how I found this recipe. Be better than me and support someone’s dream from the outset. Not after you feel terrible the next day when you realize you were an absolute ass. But if you are like me, and you realize you were a jerk to someone, support the hell out of them. They deserve it. 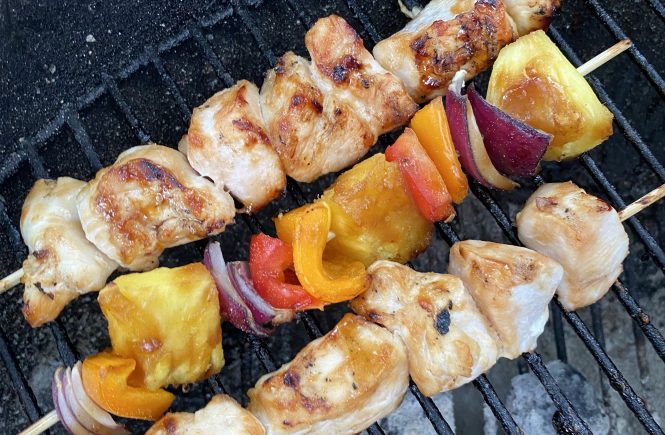 Ok, how is the summer already coming to an end? With the pandemic still roaring through the states, it just doesn’t feel like summer has started yet. There has been no movies in the park. No summer concerts. Didn’t go see fireworks because the city didn’t have them. No block parties. None of the typical summer activities.

That is not to say we didn’t make a great summer out of what we did have. We were able to sneak away to a cabin in Wisconsin. We have had weekends exploring the woods and parks (just staying away from the playground equipment). Movie nights with popcorn were had. It was a good summer, considering.

We didn’t get to have many cookouts with friends and family, which was a bummer. But we had a couple socially distanced dinners outside on the patio–eating home cooked food, drinking good wine, and pretending just for the evening that our world isn’t completely upside down.

What hasn’t changed is what I serve when we have a cookout at our place. This summer, and all the others, whenever we have people over for a cookout, this is my go-to grilling recipe. So much so, that this is the recipe I made the day JR was born since we had a cookout to celebrate JR on his birthday (birth center births mean you go home same day you give birth).

And I have been meaning to put this recipe up on the blog, but every time I make it, before I can remember to take a photo of the finished product, it’s already in our bellies. It’s that good. 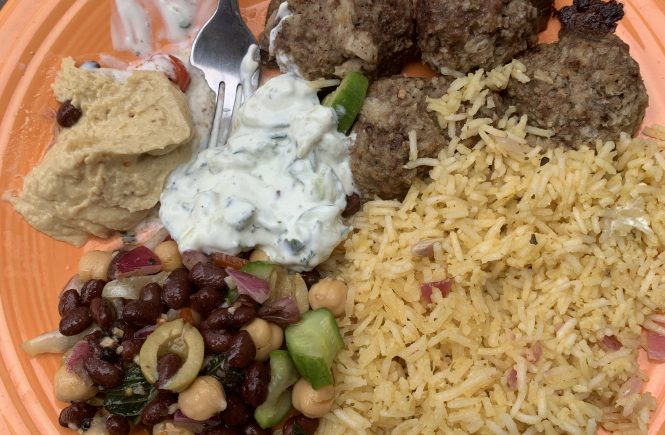 There are some little things about raising our babies that I never want to forget. Like our bedtime routine. When we put the boys to bed, I will tell them a bedtime story that I make up. Every story starts the same: There once were two little boys. And they were so beautiful. And so kind. And so smart. And they were brave. And they were strong. And they went on an adventure…”

JR and Maxie’s obsession with pirates has extended to most areas of our life, including mealtime. Forks and spoons are now swords. Then one day they asked to eat the same food that pirates eat. I had already planned to make something with ground beef. I just didn’t know what. So I decided to find something new that I had never made. That way, the boys would get their pirate food and I could branch out with ground beef recipes. And that is how I ended up making Greek meatballs. Yes, I am aware that Greek food is not pirate food. But Greece is on the water so close enough for my toddlers.

These meatballs are an excellent twist to my typical Italian ones. I paired them with Greek-style rice (ie: white rice cooked with white onions doused with lemon juice and sprinkled with oregano and garlic) and the Mediterranean bean salad. And dipped everything with hummus and tzatziki sauce. It may not be an authentic pirate meal. But my two pirates cleaned their plates.

Slightly modified from: Bowl of Delicious 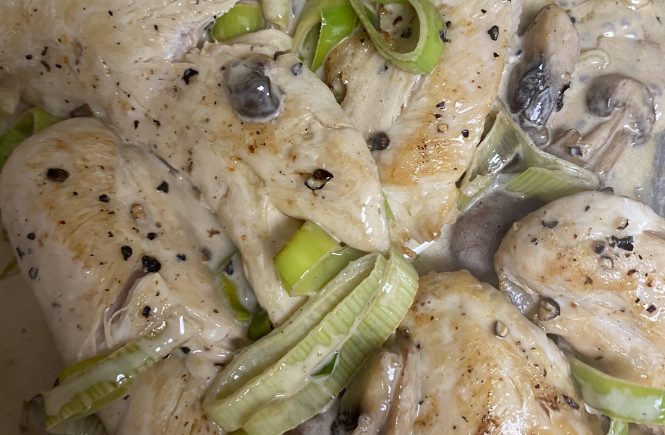 This weekend we walked 40 acres that is for sale. Matt had been eyeing this property for quite a while and finally convinced me to see it. Within the first couple of minutes, I got why Matt wanted us to see this. The land reminded me so much of the walking trails and bluffs in La Crosse, Wisconsin, where Matt and I met. The property is a great mix of forest, ravines, and open spaces. Matt, the boys, Ellie, and I walked the land, and Matt showed me where the house would be built, where the shop and sawmill would go, where we would build a treehouse. It felt like the land was destined to be ours.

But then we started reading the township ordinances. And holy hell, there were so many. Ordinances mandating that you can’t build an accessory building before a primary residence. Ordinances about not allowing you to run a business from your property. We would need so many variances. Honestly, it makes me crabby. People should not be jerks and be considerate of their neighbors. People should also be able to do what they want with their land.

Based on what we heard from the township, it doesn’t look good that they would give us any variances. It feels like we may be back to the drawing board. After 3 long years of looking for a new house, it’s exhausting. So many people have accused us of having too high of expectations but honestly, our “must have” list consists of very little: 2 stories, at least 3 bedrooms on top level, on more than 5 acres, acres are not just an open field. That’s it. I don’t feel like we are asking for too much. It just feels like it isn’t out there. Which seems unreasonable. Sigh.

So sometimes you just need an easy win. Everyone likes chicken. And an excuse to open a bottle of wine on a Wednesday. This recipe checks both those boxes, tastes incredible, and can be made in under 30 minutes.