A day trip to Capri, Italy

When I booked our trip to Positano, Italy, I knew that no matter what, we needed to fit in a trip to Capri. Capri is an island that’s about an hour boat ride away from Positano on the Tyrrhenian Sea.  It is known for having these gorgeous sea caves that are flooded with crystal blue and emerald green water when daylight shines in. Yet despite deciding that we were going to make our way to Capri, I never actually figured out how we were going to get there.  After settling into our hotel room in Positano, I jumped on google to try to solidify a day trip to Capri.  No luck.  The companies on Expedia and Trip Advisor were booked solid.  I was worried we may be stuck taking a water taxi.  Thankfully, there were three companies that were set up with tents on the beach offering full and half day tours. Surprisingly, the rates were comparable.  So we secured a full day trip with this company to Capri for 140 Euro for the two of us. 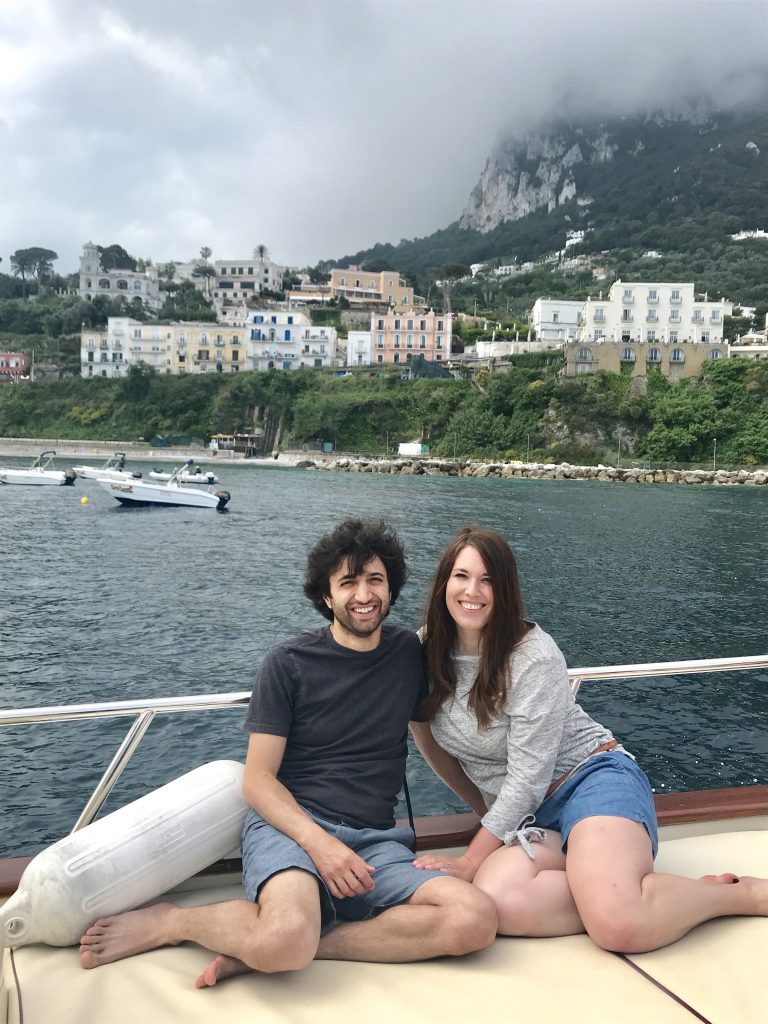 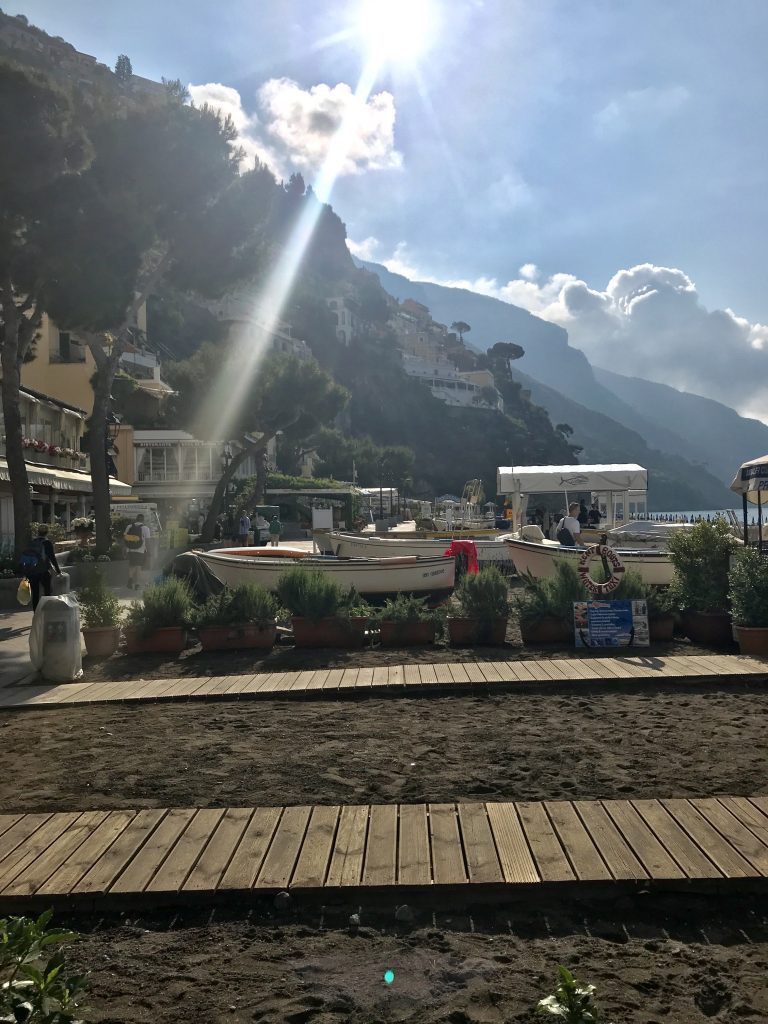 Our full day tour started at 8:45 a.m.  We jumped on a boat with 10 other people, tossed off our shoes, and headed to the front of the boat. The front of the boat was entirely padded so you could lay out and sunbath, nap, stretch out. Also, with just the rails in on the edge and nothing else, our view was incredible.  It felt more like we were on a raft than on a speed boat.

The one hourish boat ride was full of rolling, green cliffs sprinkled with random little towers.  The water was so unbelievably blue.  We laid back and soaked in the views, both wishing we owned sunglasses. 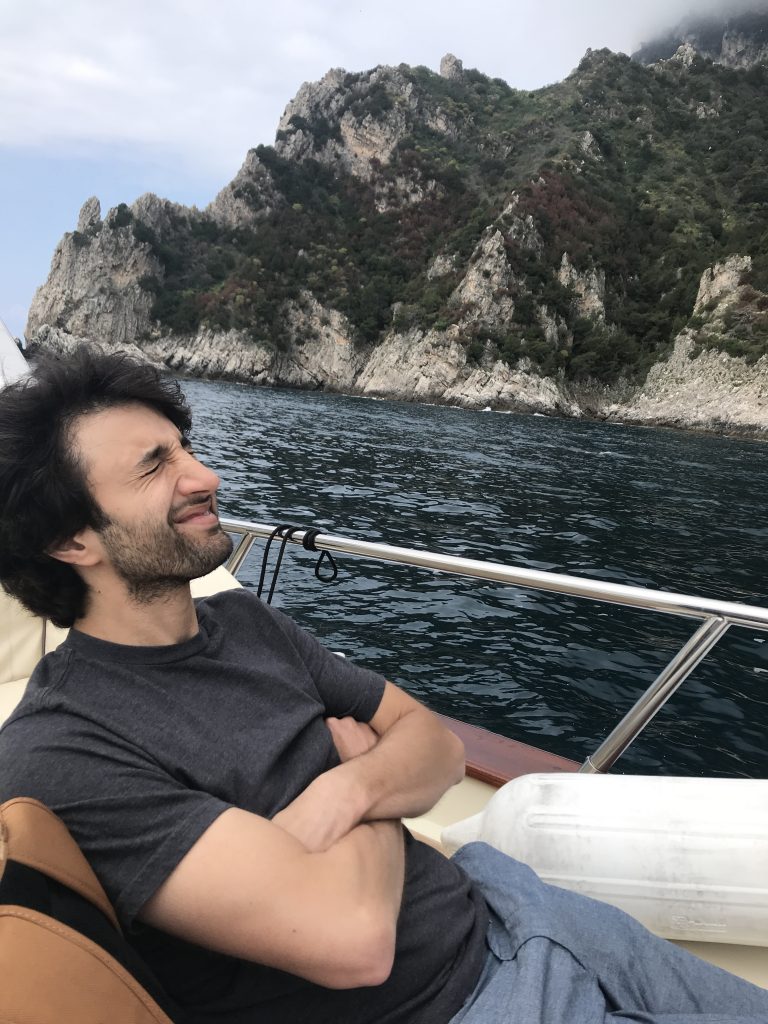 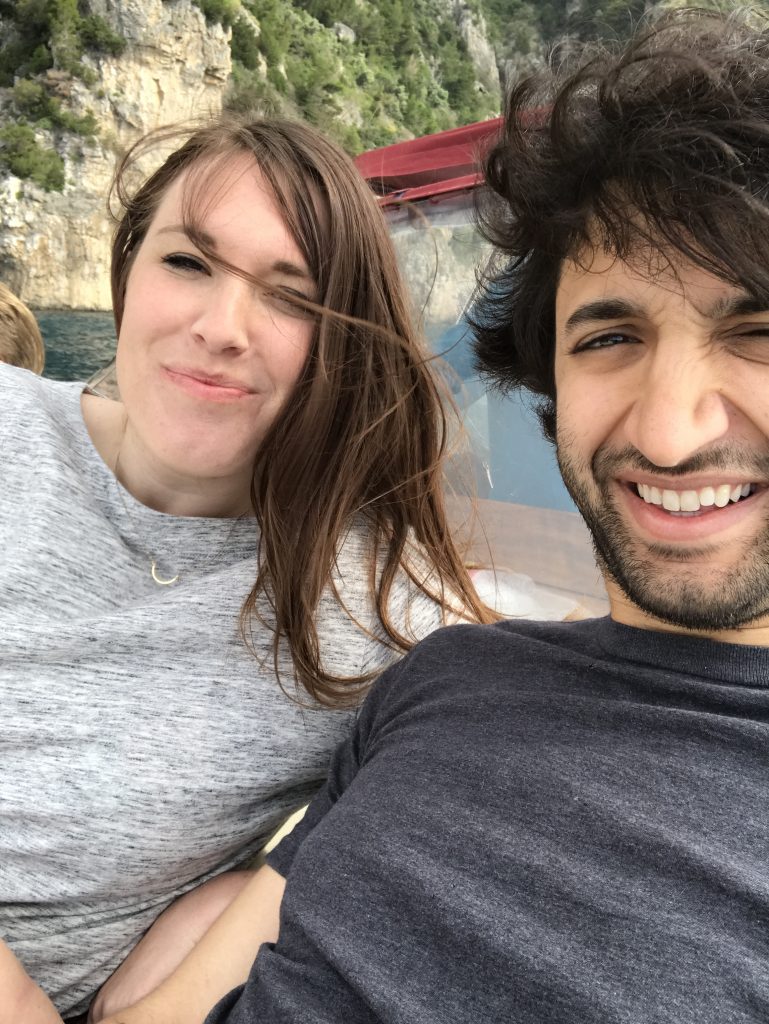 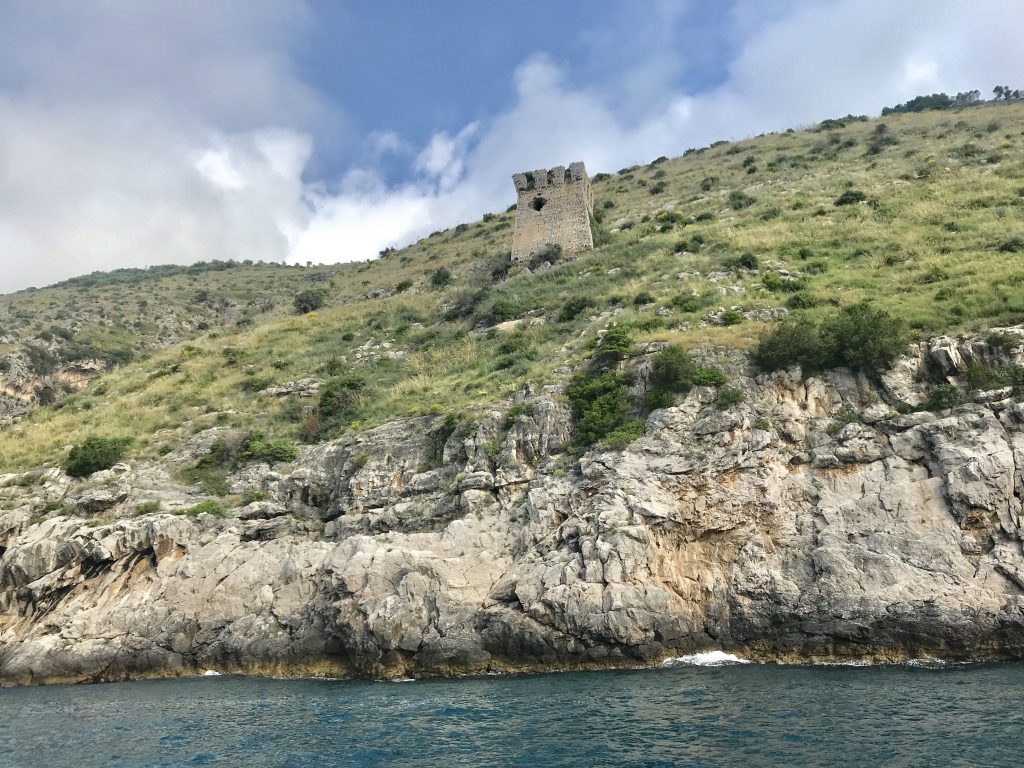 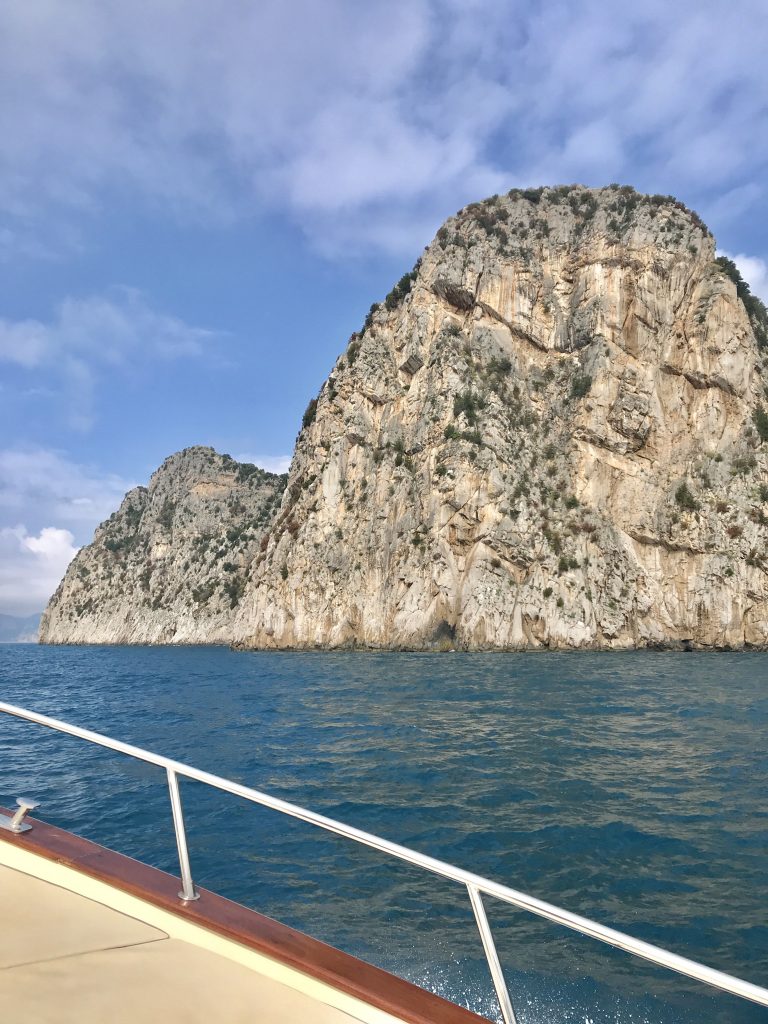 Once we made it to Capri, we circled the entire island.  The cliffs around the island were so incredibly high that fog enveloped the tippy-tops.  The cliffs look like this continuous grouping of valleys, and birds circled between the valleys.  As we floated around the cliffs, it honestly felt like we are about to enter Jurassic Park. 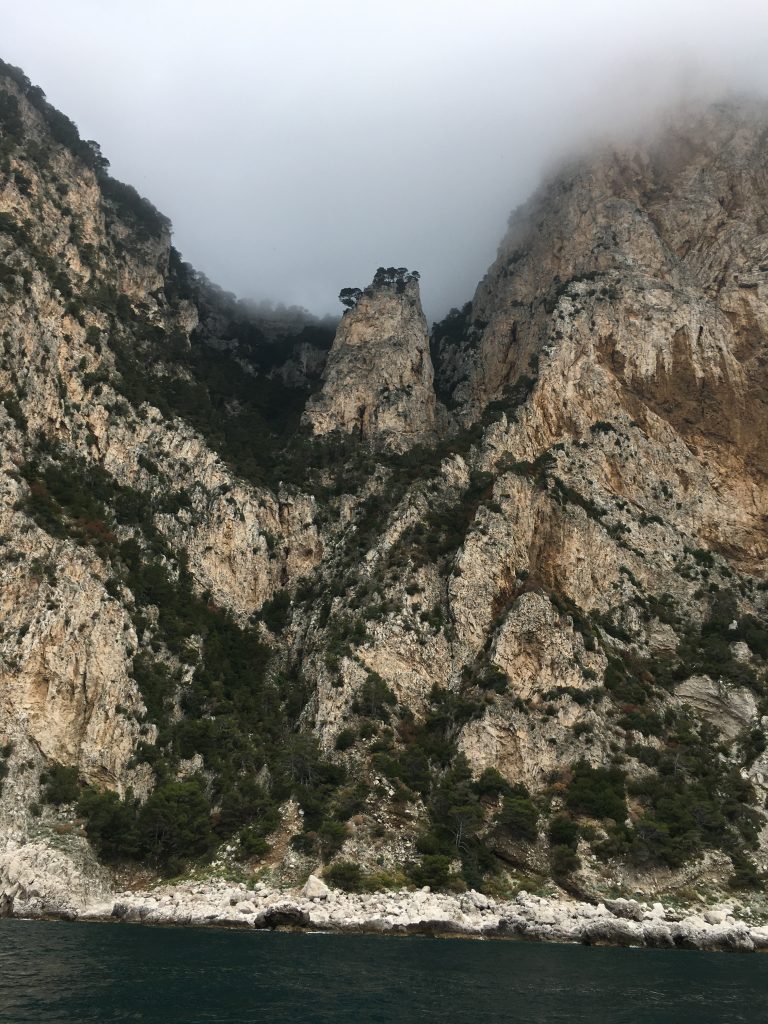 The island is probably most well-known for a sea cave called the Blue Grotto. When the sun hits the water in the sea cave, the water is a crystal, deep blue or emerald green.  To go in the Blue Grotto, it cost 14 Euro a person (on top of whatever you paid to get there), but you only get to spend about a minute in the cave. When our boat arrived at the Blue Grotto, there was a huge line of boats waiting to get in, and our captain informed us that it was likely more than an hour wait.  No thanks. Plus, he knew another sea cave that had the same green/blue water that was free and without the wait. We pulled our boat into the free sea cave and starred into emerald green water.  The water was so clear that you could see the bottom.  It was unbelievable! 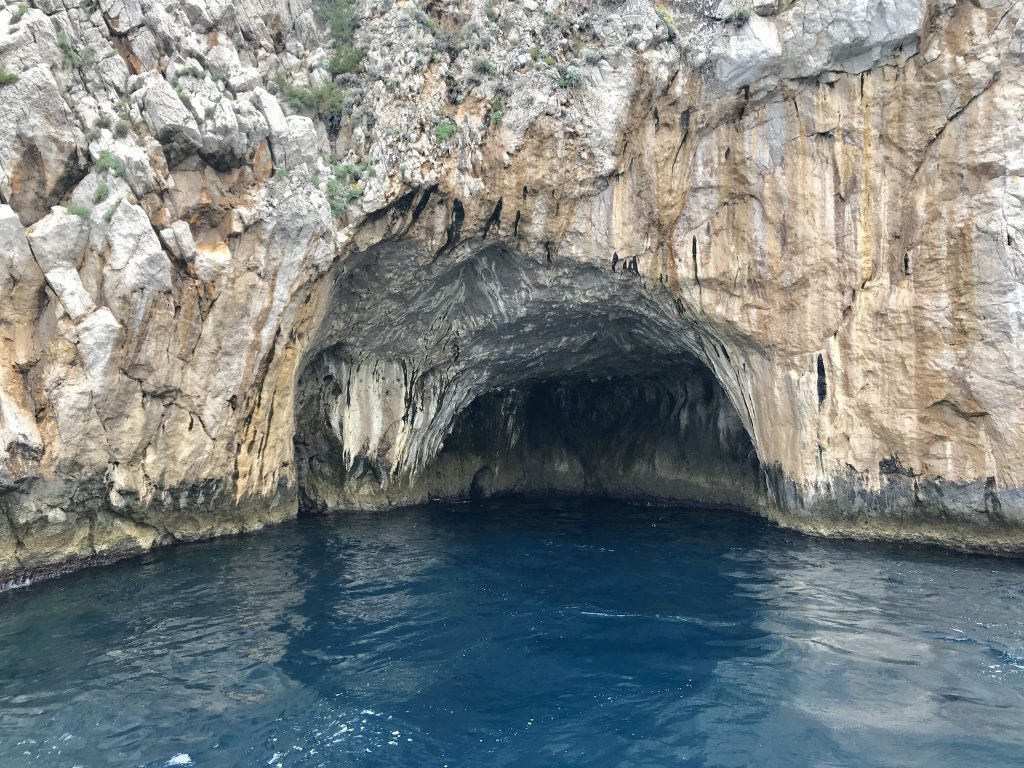 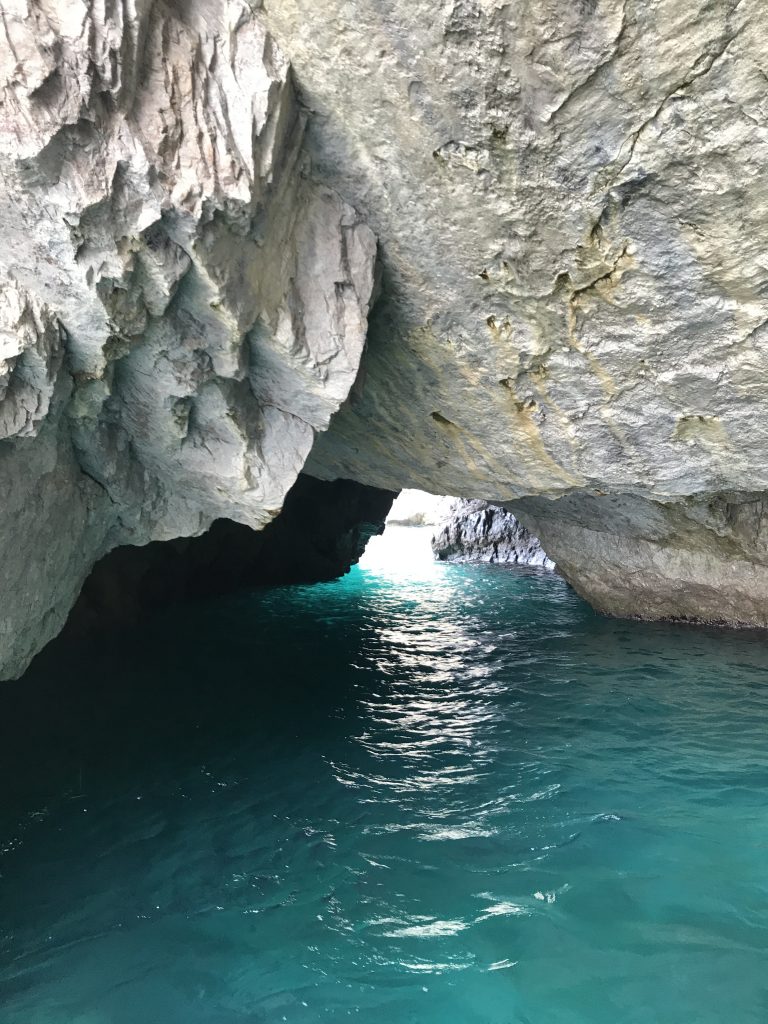 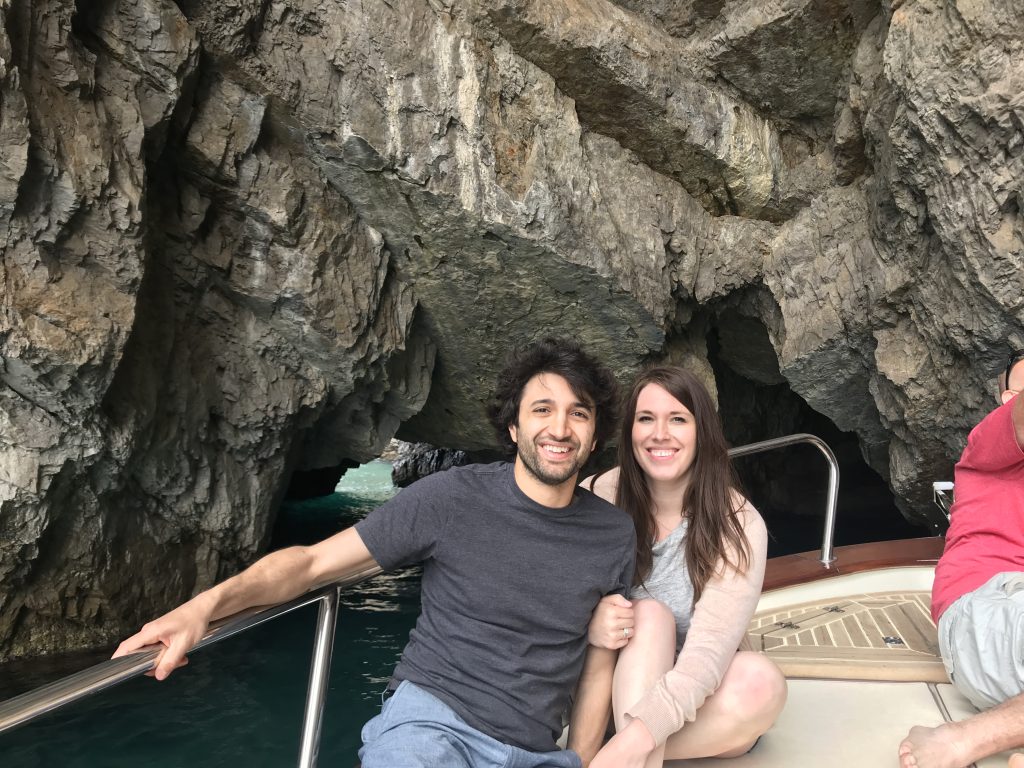 After circling the entire island, we docked at the marina piccola (the smaller marina of the two) and had three hours to explore the island. The small marina has much much less of a crowd.  There are several restaurants and some shops, but it clearly is the more relaxed part of the island. 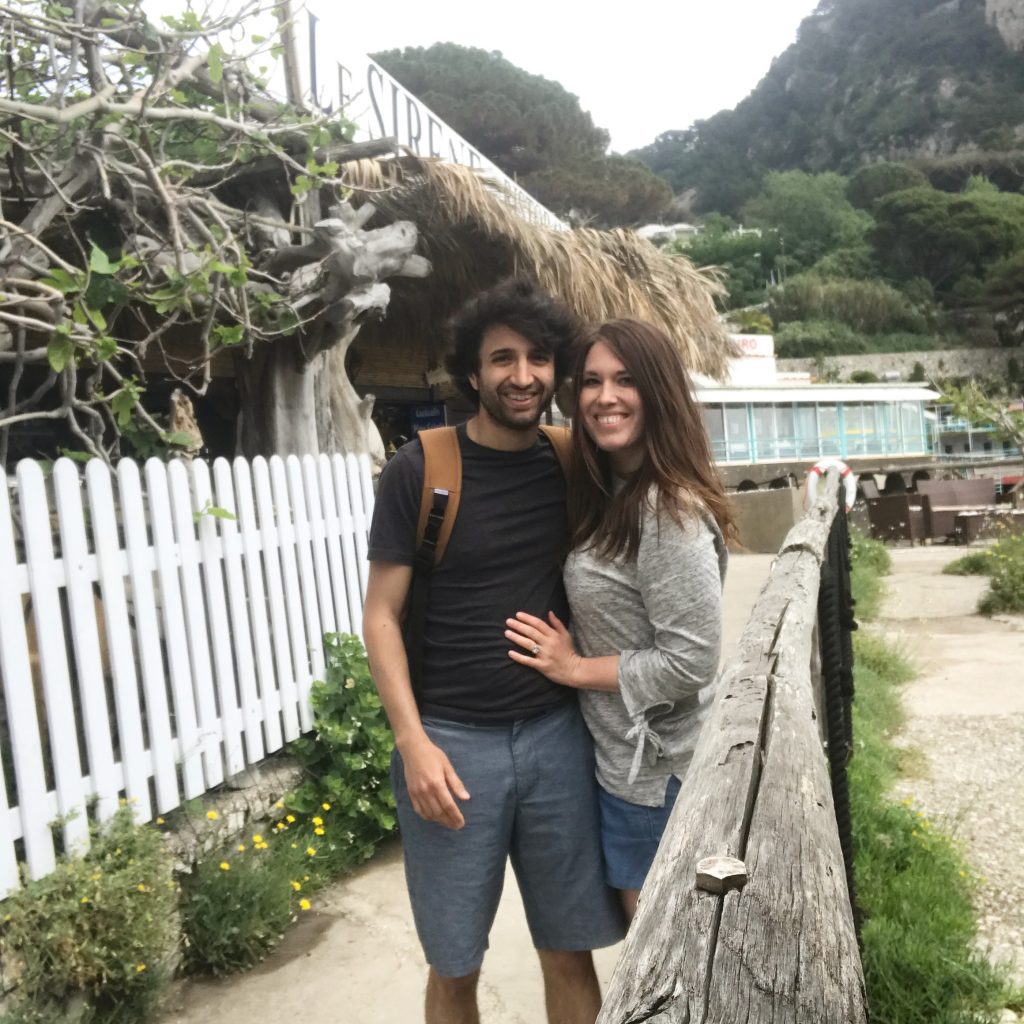 Similar to Positano, Capri is built on cliffs.  But its buildings do not look like they are velcroed on the side of the cliff.  The buildings are sparsed throughout the bottom and on the top, but they are not teetering at the edge like they are in Positano.  Still, if we made our way to the top, the view would be quite remarkable.  Seeing that the higher part of the town was at the marina grande (the main one), and the fact that most everyone else on our boat tour was heading to the marina grande, we followed suit, and we jumped on the city bus to the main area, which was about a 10 minute bus ride away.  The bus dropped us off at the top of the city, high on the cliffs.  The streets were packed with people, touristy stores, and buses that were too big for the narrow streets.  But the view was gorgeous.  The ocean stretched on and on.

We took in the view for a bit, and then headed towards the beach of the marina grande, which was about a 15 minute walk down a hill that honestly feels at times like you are walking at a 90 degree angle. I don’t think I’ve ever walked at such a steep angle for such a long distance.  And with every step down, we knew we had to take that same one back up.  The path felt like we were in a stone maze.  While we were walking through a neighborhood that you typically would navigated through on open sidewalks, the path was lined with high, stoned walls.  Behind the stone walls were small homes with large gardens growing lemon trees.  From time to time, the leaves and lemons draped over the walls like canopies and you would see that the lemons were the size of small cantaloupes. Once we made it to the bottom, we were completely out of breath! 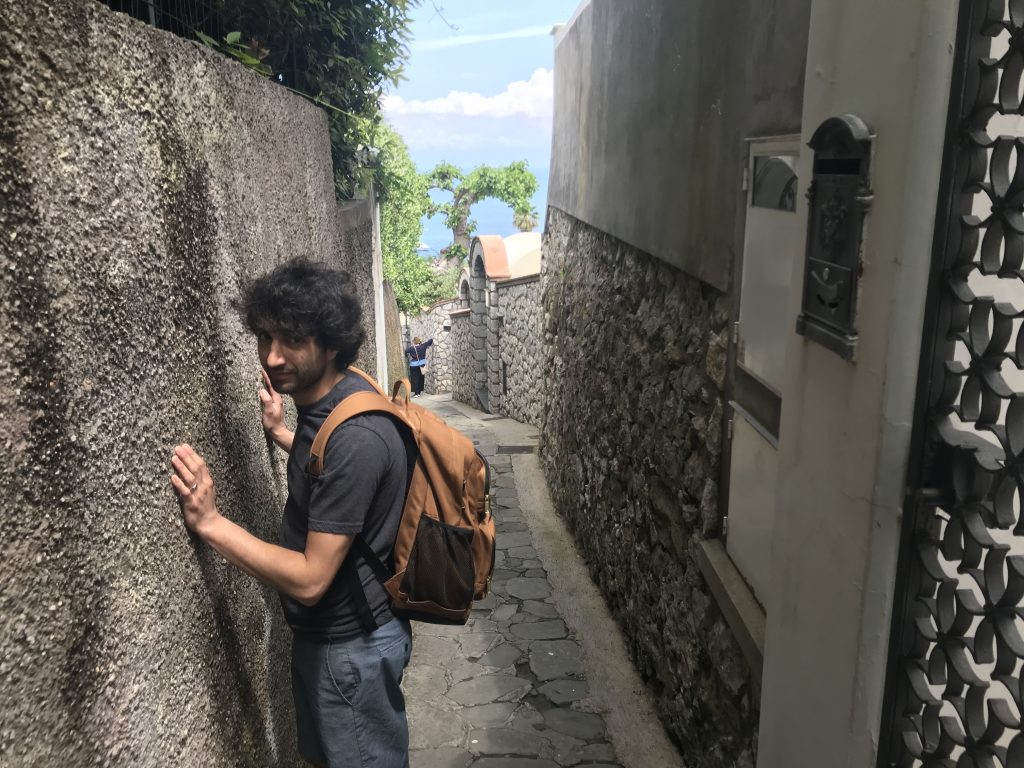 The walk to the bottom of the cliff was fun, but in retrospect, we both wish we’d just stayed at marina piccola.   We only had three hours on the island and once we were at the marina grande, we needed to make sure we got back to the marina piccola in time.  The walk between the two marinas would take over 45 minutes one way, so the best way to travel between the two is by city bus.  The city bus comes about every half hour, and a line for the bus starts early.  So while you could plan to take the 2:30 bus, if there are too many people in line before you, there may not be room, and you’ll have to wait for the next one.  The stress of catching the city bus to head back to our marina before our boat left, combined with the touristy nature of the marina grande, just wasn’t our thing.  While the view from the top was gorgeous, we were staying at Positano so we were not short on oceanscape views.

After the three hours on the island, we made the journey back to Positano. 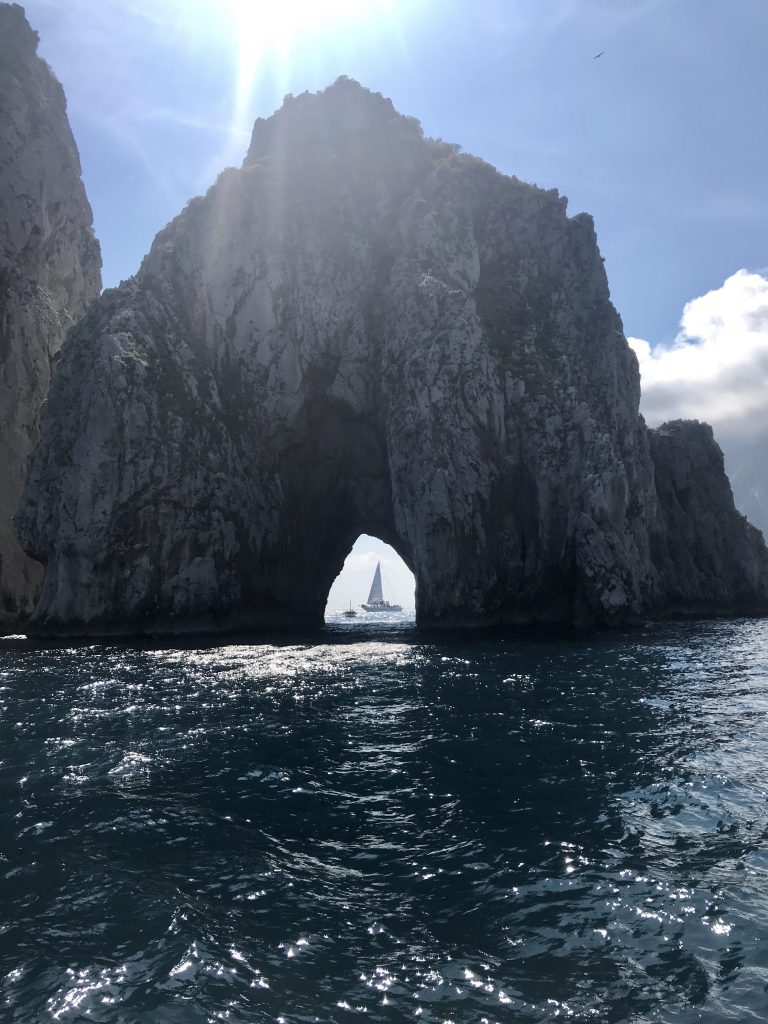 But before we made it back home, we took a detour.  Our captain drove us to a calm cove, popped a bottle of prosecco, and announced that if anyone wants to jump into the ocean, now was the time.  It was a brisk day, and the water looked cold.  But there was no way I was going to miss the chance to swim in the Tyrrhenian Sea.  So I tossed off my shirt, got to the back of the boat, and plunged in.  I have swam in the Atlantic and Pacific Oceans before, but it had always been from a beach.  This was my first time jumping into salt water from a boat, and it was a huge shock.  The salt water is dense and heavy and pushes down on you.  I jumped feet first into the water, and I kept diving deeper and deeper down.  It was surprising how long it took me to stop diving down and start making my way up to the surface, and even that felt so slow. 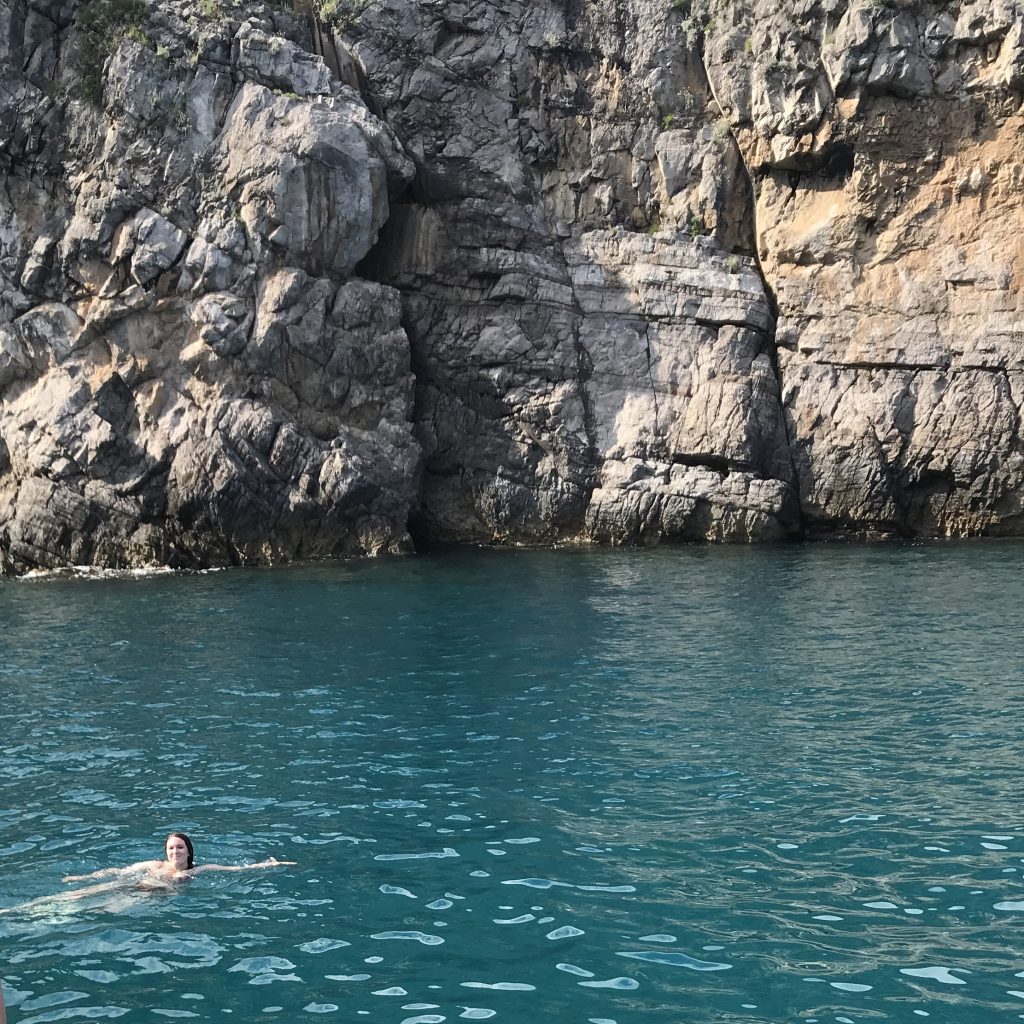 Out of the 12 of us on the boat, only one other guy initially jumped in with me (not Matt, he wouldn’t do it).  Sure, the water was cold at first, but once you swam around a bit, the temperature evened out and felt like slightly cold bathwater.  We yelled to the remaining 10 on the boat that it really wasn’t that bad.  But I am from Minnesota and he is from the Netherlands, so we can handle cold water.  Hearing that I was from Minnesota, a guy from Quebec, Canada said there was no way he was going to bested by someone from America and jumped in after us.  Too late, he already was 😉

After a couple minutes swimming, we joined everyone on the boat for some prosecco and continued our journey home.  We pulled back to the dock around 6:00 p.m., sunkissed and tired from a full day of boating.

All and all, it was a perfect day excursion. Swimming and boating are high on my list of favorite activities so it was well-worth the price of a full-day tour v. a water taxi for us.  Being able to take our time to boat around the island, jump from cove to cove, and take a dip in the ocean, we were happy with our tour.  For certain, if we ever make our way back to Positano, it will include a day trip to Capri!  It was easily a highlight of our trip!

Other Italy posts: Positano Travel Guide // Five things you should know about Italy before you plan a vacation there // Rome at a glance 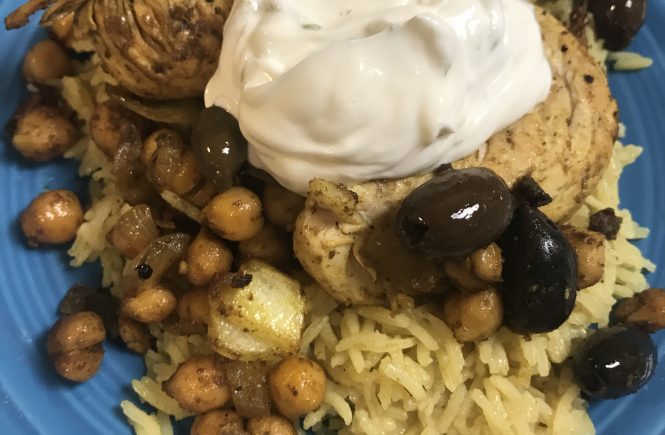 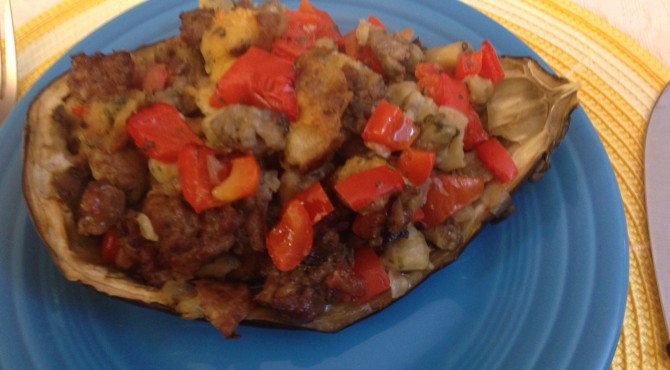 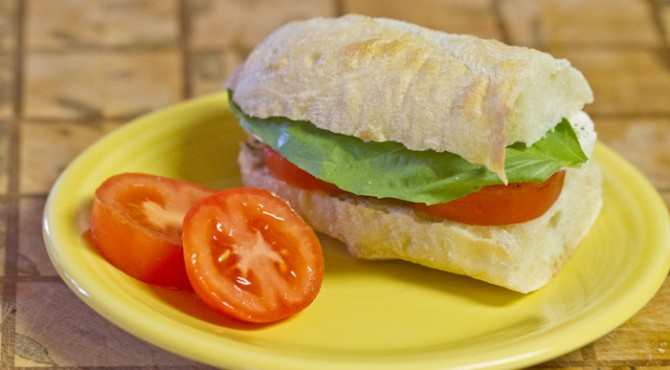