Rome at a glance

To round out our Italian adventure, we spent an extended weekend in Rome.  When we began planning our trip to Italy, so many people said we HAD to go to Rome.  A city rich with history, ruins, culture, and just 2 hours away from Positano.  Since we can never guarantee that we will make our way back to Italy, we wanted to see as much as Italy without cheating our experience of each city.  Tacking an extended weekend in Rome was exactly what we were looking for.

We booked a hotel recommended by a professor at the University of Minnesota: Hotel Villa San Pio.  Let me just get this out there right away. Do not stay here. Beyond the fact that we have never spent the night on a harder mattress (was there even a mattress?) and the fire alarm went off over 10 times in the middle of the night, BOTH NIGHTS (and they were all false alarms apparently), the hotel is quite a bit off farther away from the action than we’d like.  It was about a 20 minute walk to the Colosseum, which doesn’t sound too long, but the Colosseum is on the edge of the major attractions.  The Vatican was over an hour walk from our hotel.  By the time we walked home, our feet were killing us.  We walked approximately 13 miles in one day. My feet were not pleased for day two.  If you aren’t opposed to public transit (like Matt is), the location really isn’t that terrible.  There are public buses and the like that you could take to get you into the middle of the action-or at least take you home at night.  And the breakfast area is a quaint little garden that truly is gorgeous.  There’s no robot juice but it had a decent spread.

Rome surprised us. Before the trip, everyone raved about the city.  “You HAVE to go!” “It was my favorite city in Italy!”  We were expecting to be blown away by the grandeur of the ruins, history, and culture.   Yes, the city is filled with jaw-dropping buildings, and that part lived up to the hype.  But the city is also filled with garbage.  Actual garbage. And if there is a brick wall, a bridge, building, anything really, there is likely graffiti on it.  Hands down, it is the dirtiest city Matt and I have ever been to.  You will be taking in the amazing Pantheon, while on the other side of the street, the buildings are covered with graffiti and the streets are littered with garbage.

It was disappointing to see a city with so much history and amazing ruins also filled with trash. Especially after coming from the Amalfi Coast, where the cities were so clean, the water was crystal clear, and there was little to no graffiti.  So, while I am so happy we went to Rome, I was so confused why no one gave us the heads up that the city is dirrrty.  We could not be the only ones who noticed, right?  So you definitely should go to Rome.  But you should know, there is trash on the streets and graffiti on the buildings. 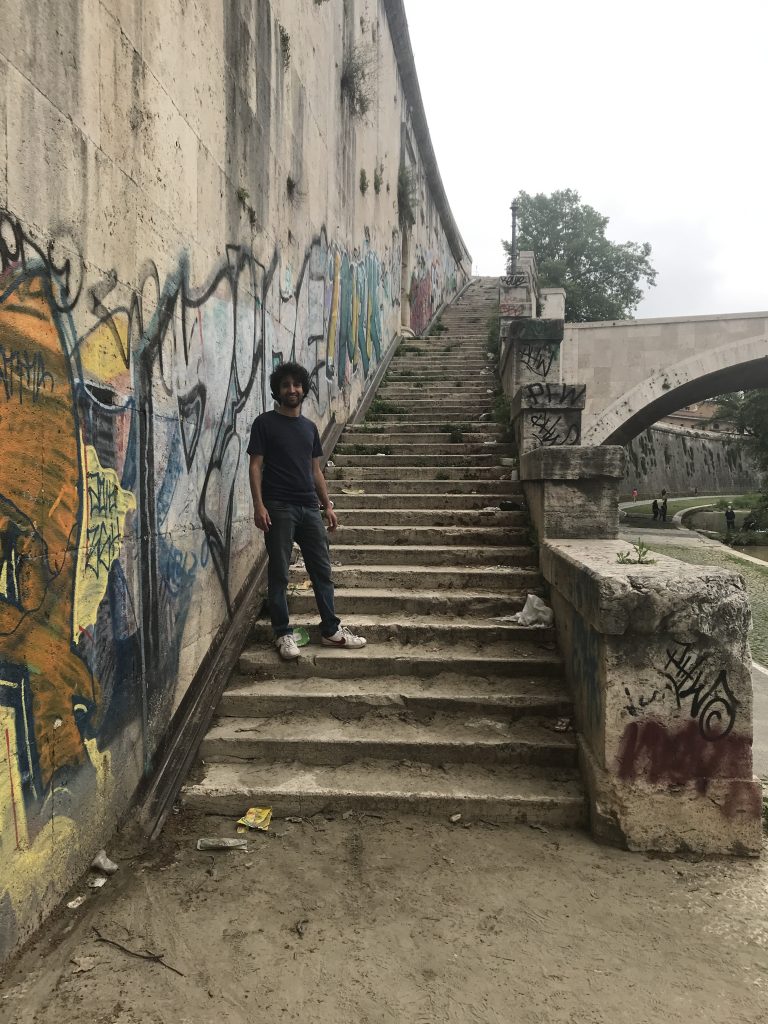 But besides the trash, you turn a corner, and there is a ruin.  It’s unbelievable.  Smacked right in the middle of the street, between restaurants and little shops, will be a portion of an old temple.  And so many of these ruins are free. The Trevi Fountain, Spanish steps, the Pantheon are free. Which is an amazing part about Rome: you can experience a quality Roman vacation without spending tons of money to get into ruins.  Just walk around the city.  You’ll run into an old building, an old temple, or some random pillars.  All tucked within the walls of the city. 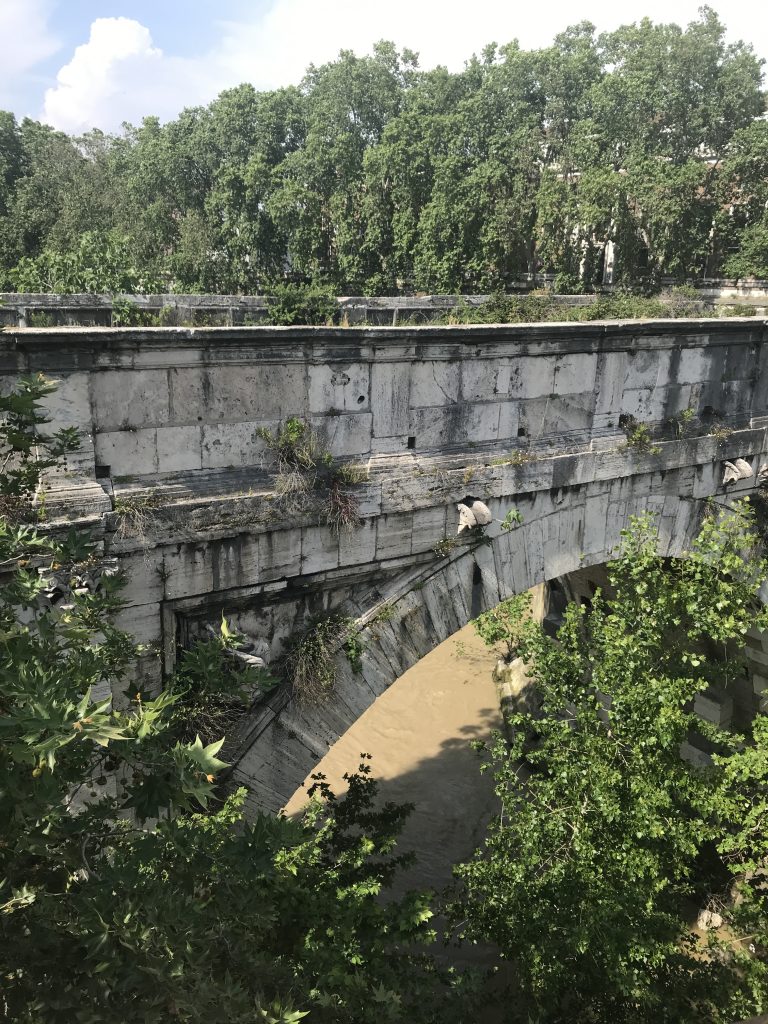 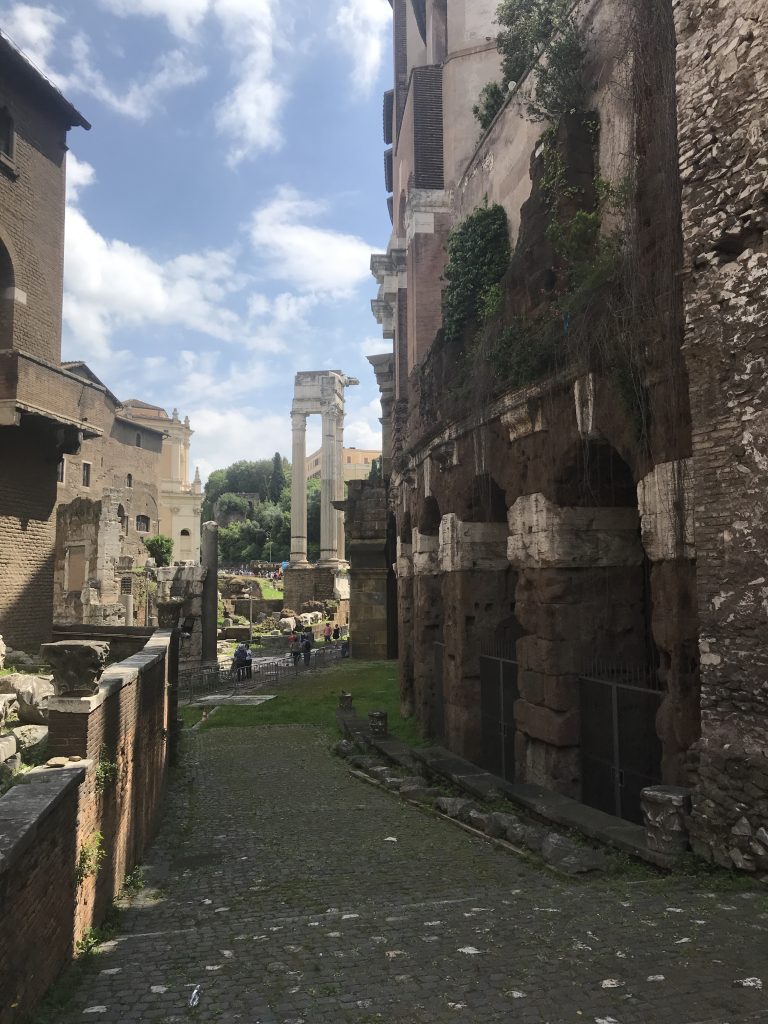 There is so much to see in Rome.  And so many tourists.  Not wanting to spend our time waiting in lines, we set up tours with City Wonders: to see the Vatican and St. Peter’s Basilica and another to see the Colosseum and Roman Forum/Palatine Hill. 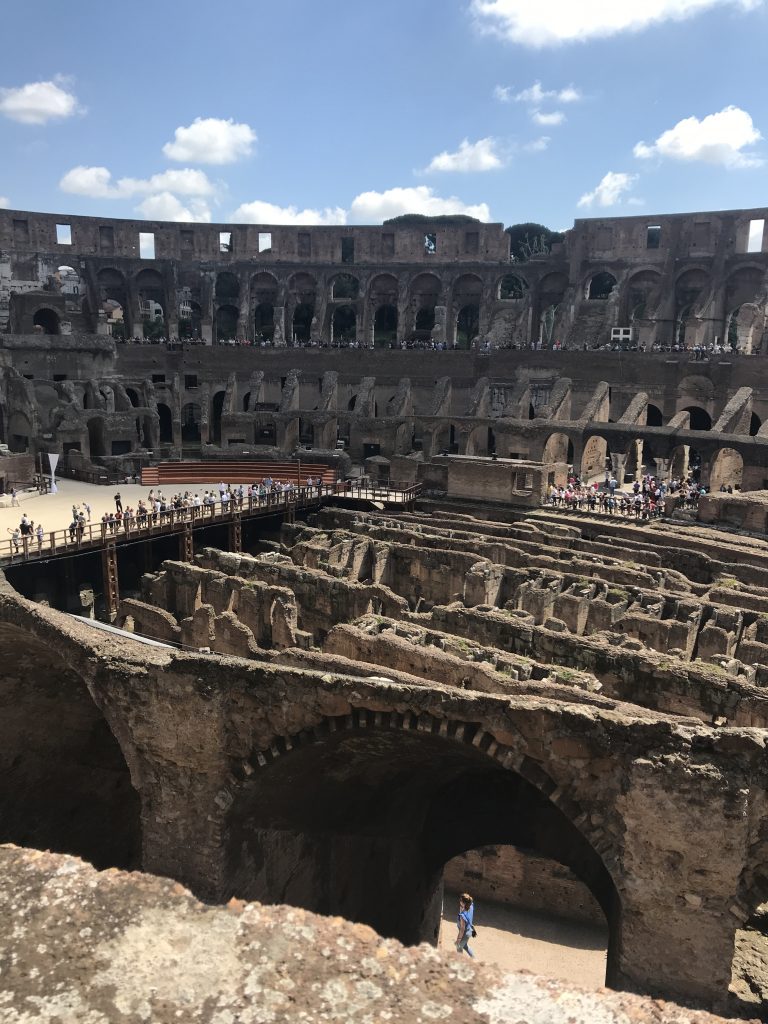 The tours were great.  We got to pass hundreds of people waiting in line to get in and got some background on what we were seeing. The downside is that the tour does not give you tons of time to wander around and soak in everything (until the end–at which point you can wander around at the last location for as long as you’d like).  But be warned, there are tourists everywhere.  So some of the allure is lost because wherever you turn, there are a handful of people and their iPhones.  Per our tour guide, try to avoid Rome during June through August, as it is the heavy tourist season.  We were there at the beginning of May so on the cusp of the busy season.  The well-known places were quite busy (the Vatican, Spanish steps, Trevi Fountain) but the less must-see places weren’t packed.

Hands down my favorite part of Rome was Palatine Hill and the Rome Forum (they are connected).  It is basically this enclosed area in the middle of Rome that has ruin after ruin.  You’ll see an old church across from various columns near old water gardens.  It truly feels like you are walking in ancient Rome.  And the views are breathtaking.  Plus, because the entire area is so large, we did not feel like we were surrounded by other tourists. 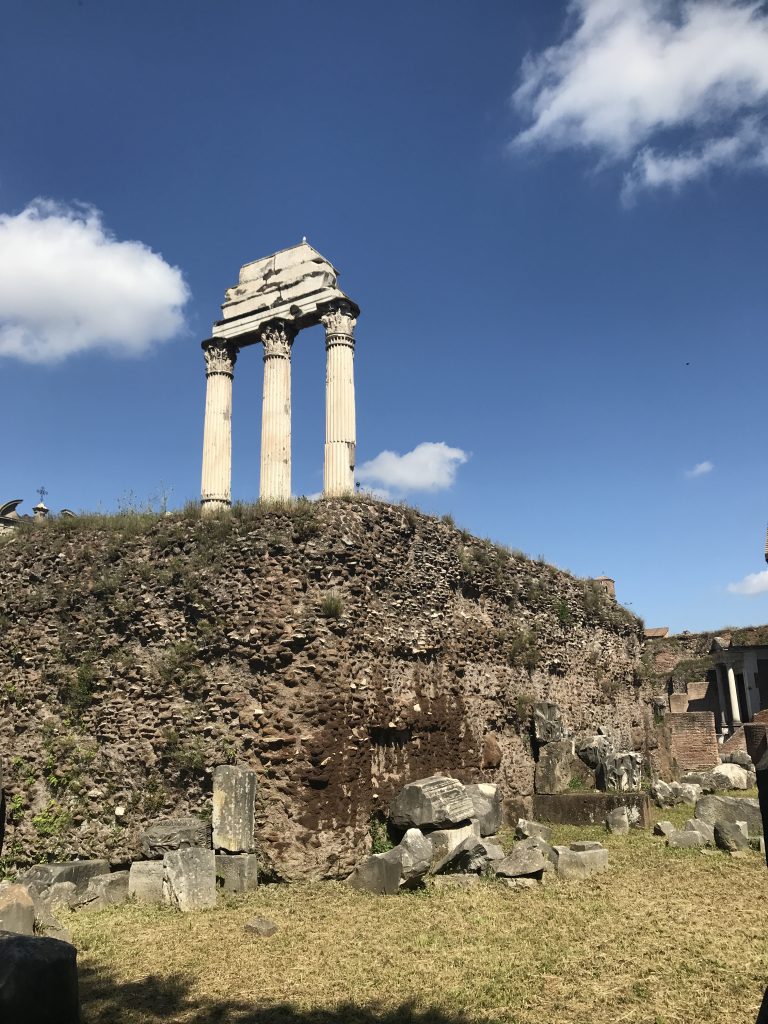 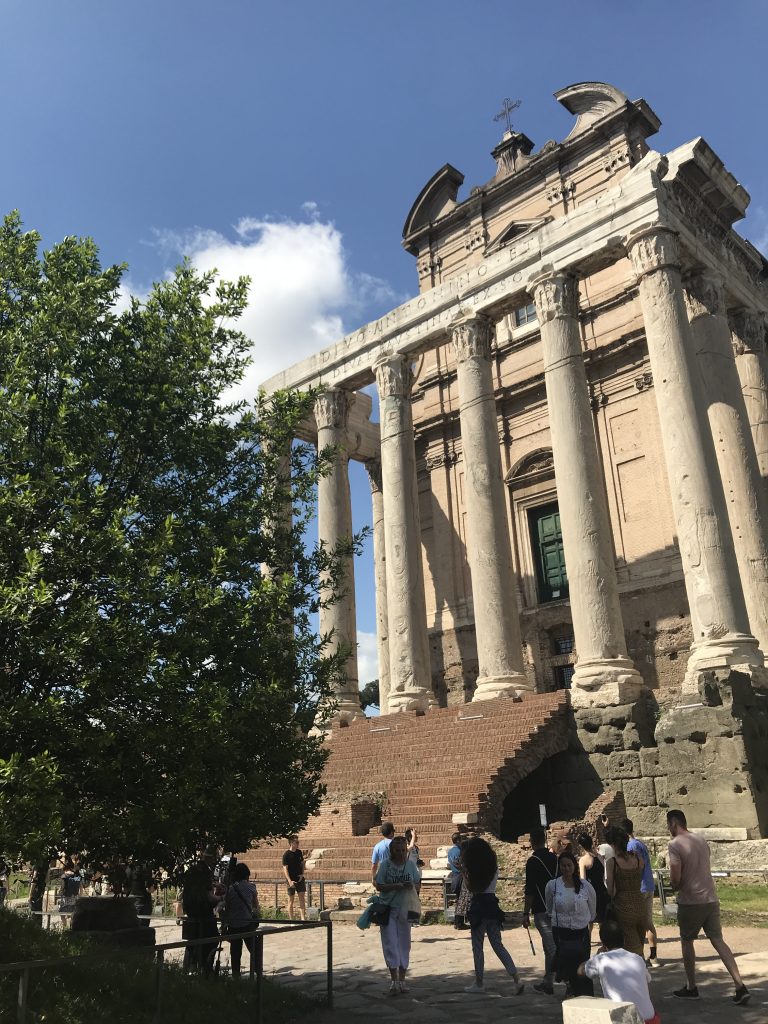 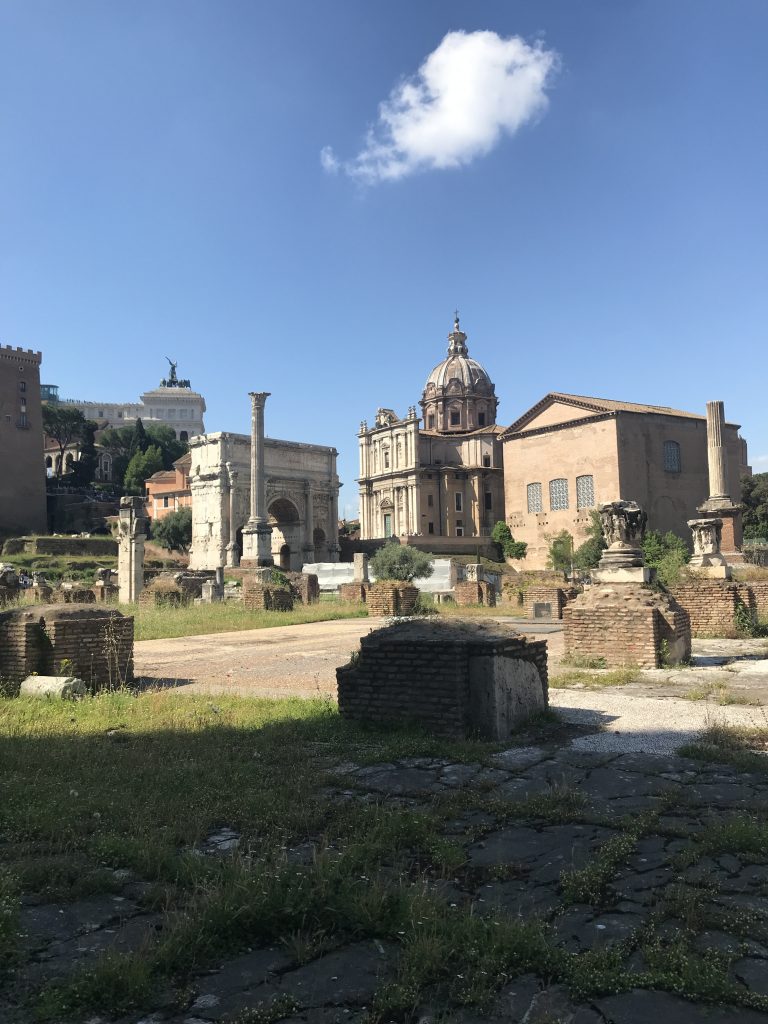 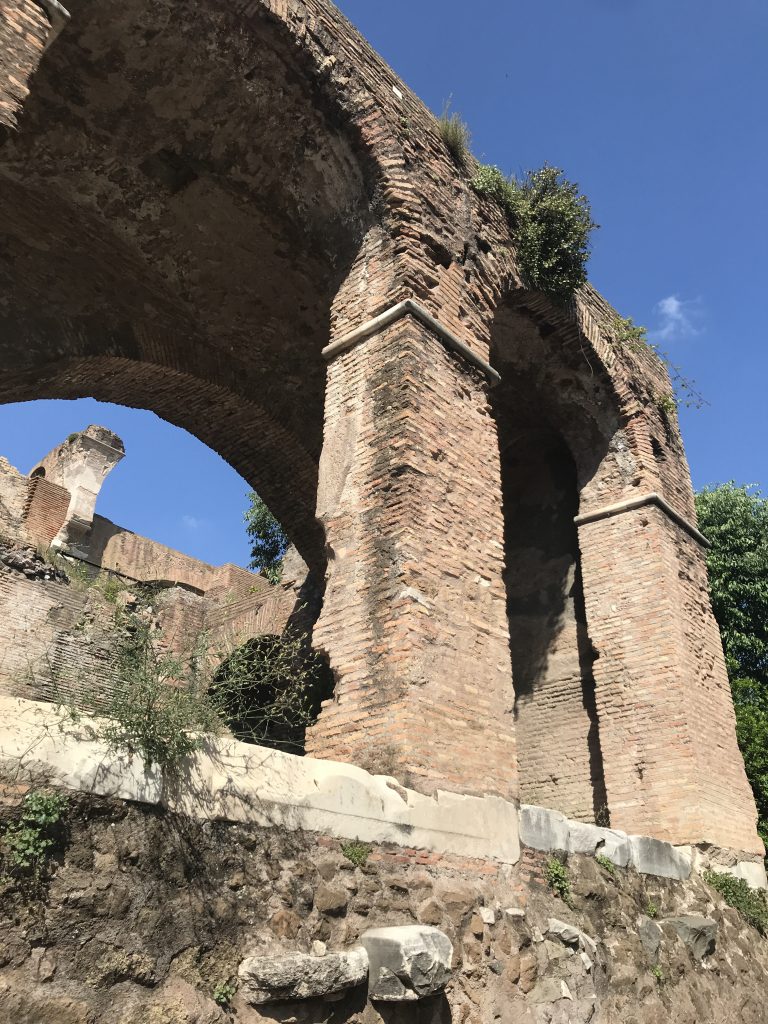 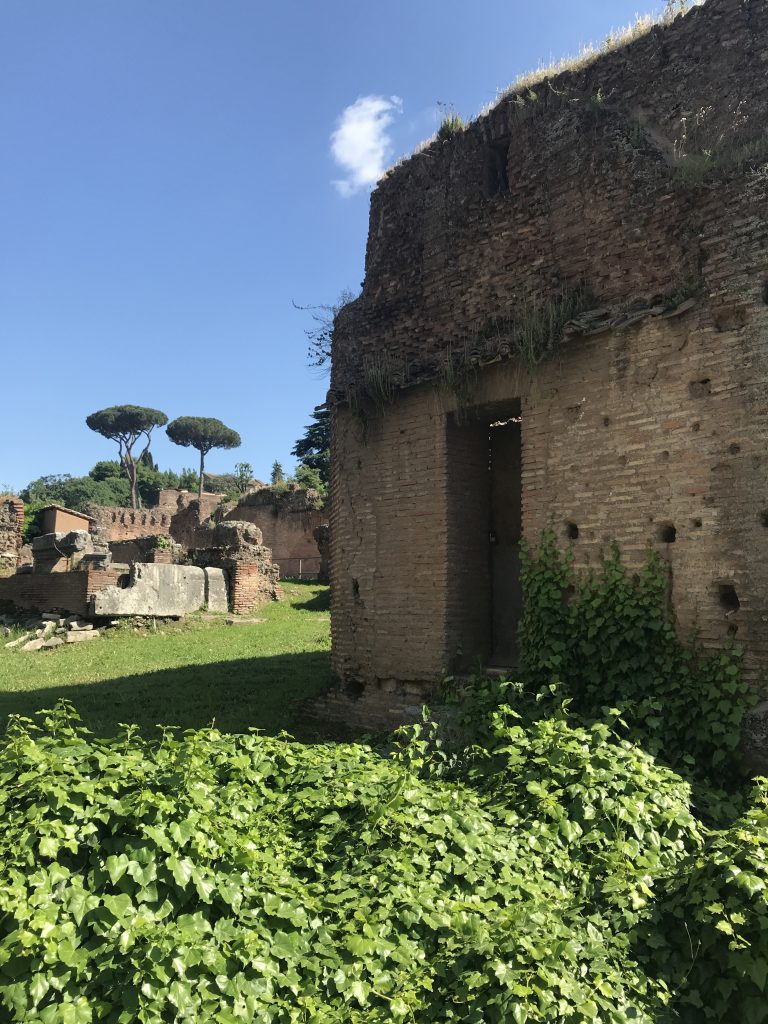 The Roman Forum and Palatine Hill are huge.  You could easily spend an entire day wandering around, imagining yourself as a Roman.  And there are trees and sections of open grass throughout Palatine Hill so I highly recommend stopping at a deli and grabbing cheeses, meats, antipasto, and a bottle of wine to enjoy for lunch. You can take your time and really take in the views. Our tour ended within the Roman Forum and Palatine Hill so we had the rest of the afternoon to explore.  Matt and I spent the next couple of hours strolling around, pretending to be Romans, and came up with our next great bazillion dollar idea.  A Roman theme park recreating this place.  How is that not a thing yet? 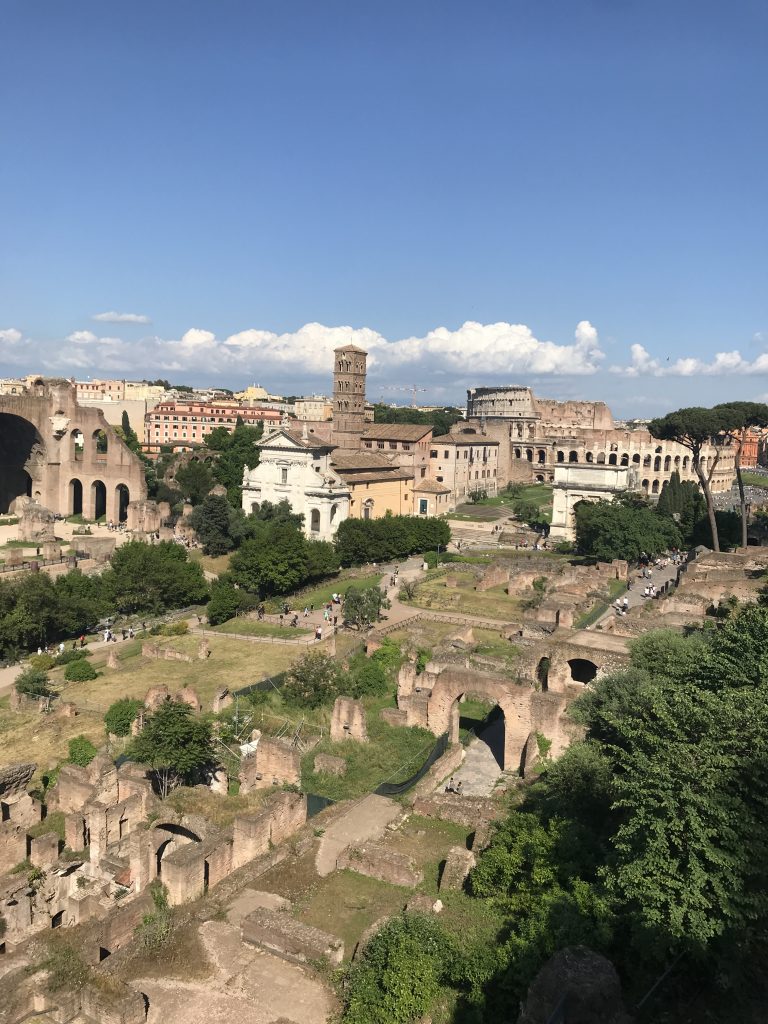 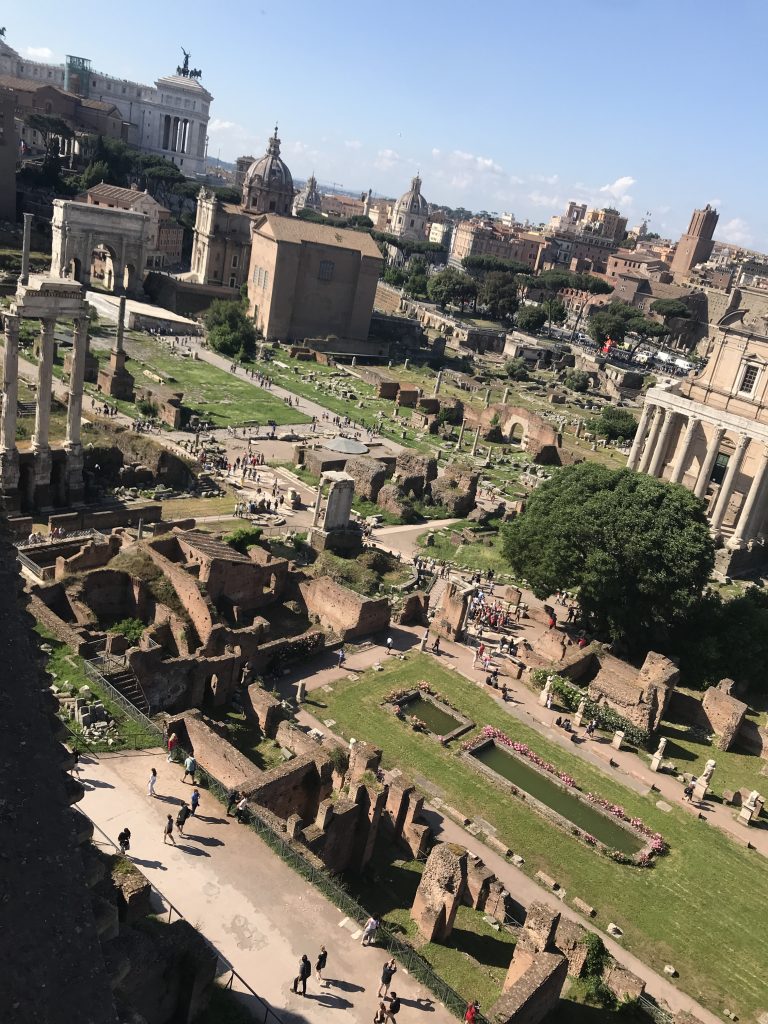 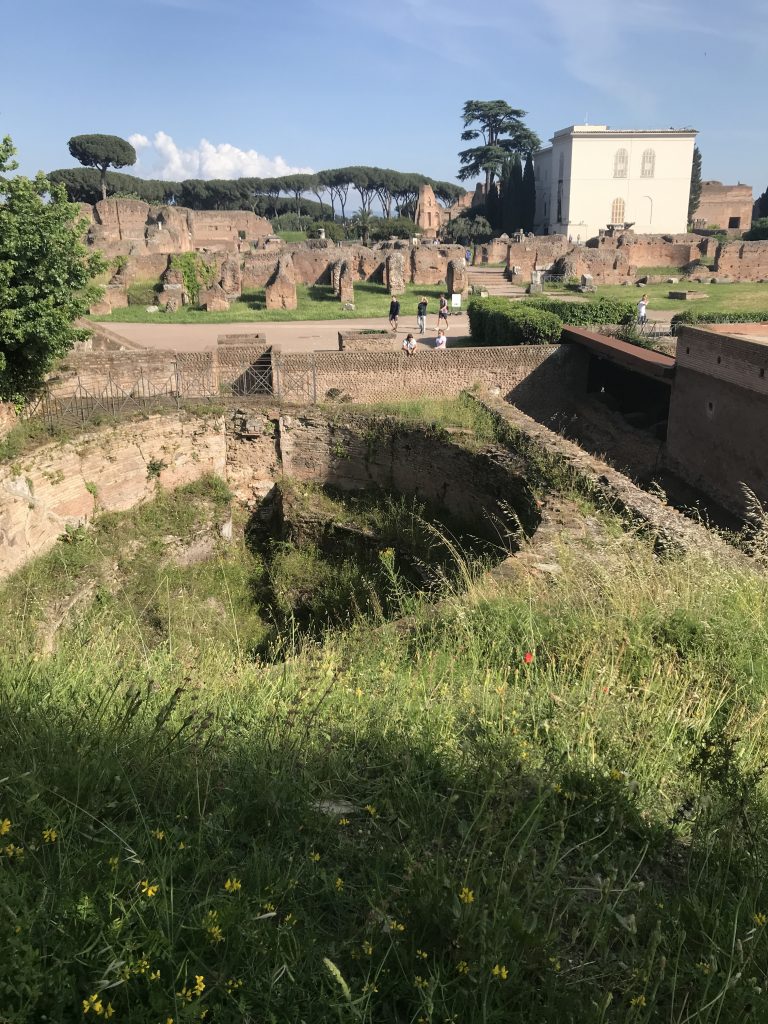 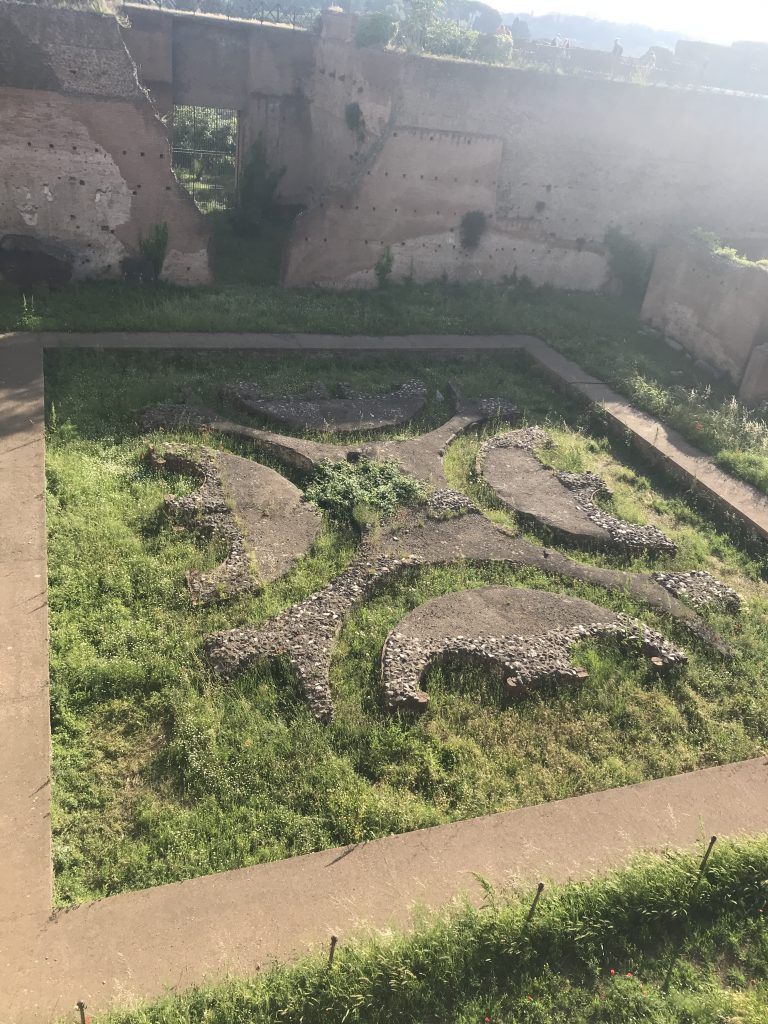 Another must see for us was the Pantheon. The Pantheon is an old Roman temple which is free for you to go in (huge bonus!)  While there was a line to get in, it moved very quickly, and we were in the temple in less than 5 minutes.  The Pantheon is massive.  It is located in the middle of a square, and the size of the building is overwhelming.  The entry columns seem to go on forever. 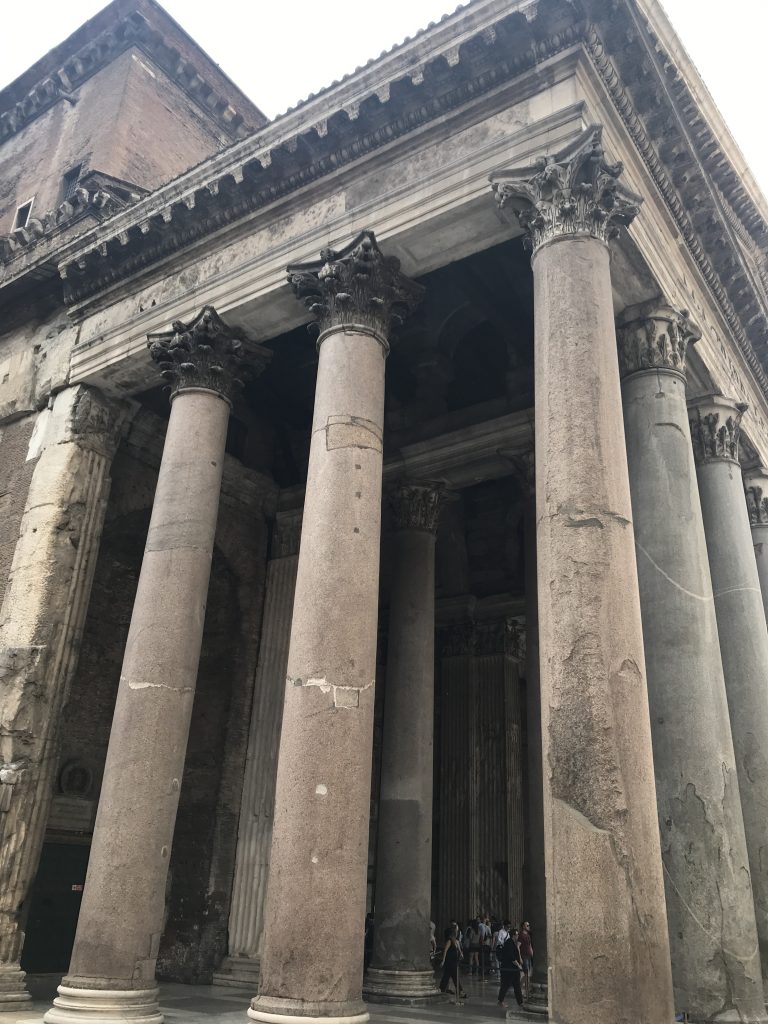 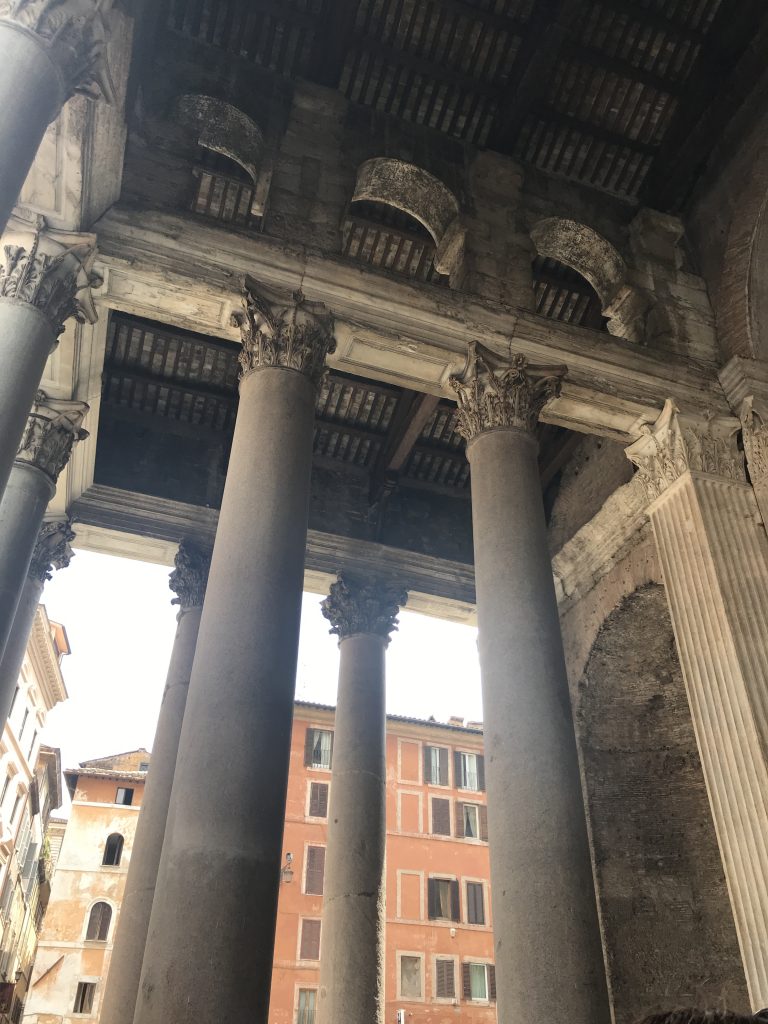 Once inside, we went right for the center and looked up.  The Pantheon has a perfect dome with an “eye” at the direct center.  A light shines through the hole and that’s how you know if you are standing in the direct middle.  The walls are deliberately designed, with cube panels circling the dome, while the floors have a square and circles checkered throughout. It was fun to walk around and imagine coming to this massive building for church. 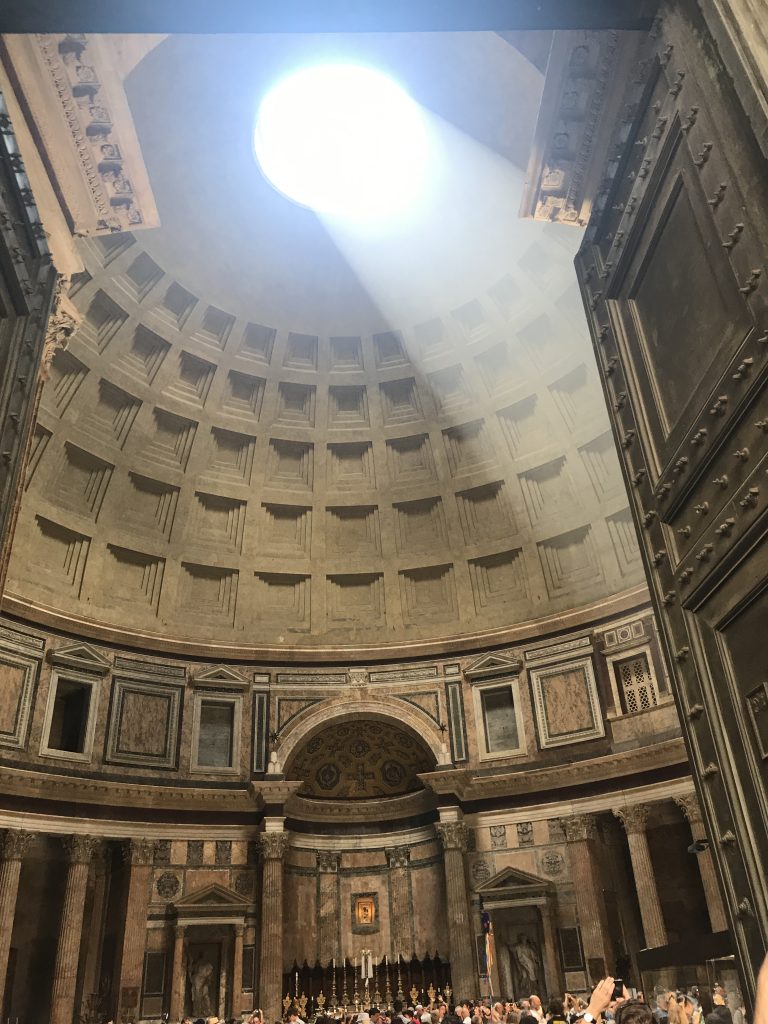 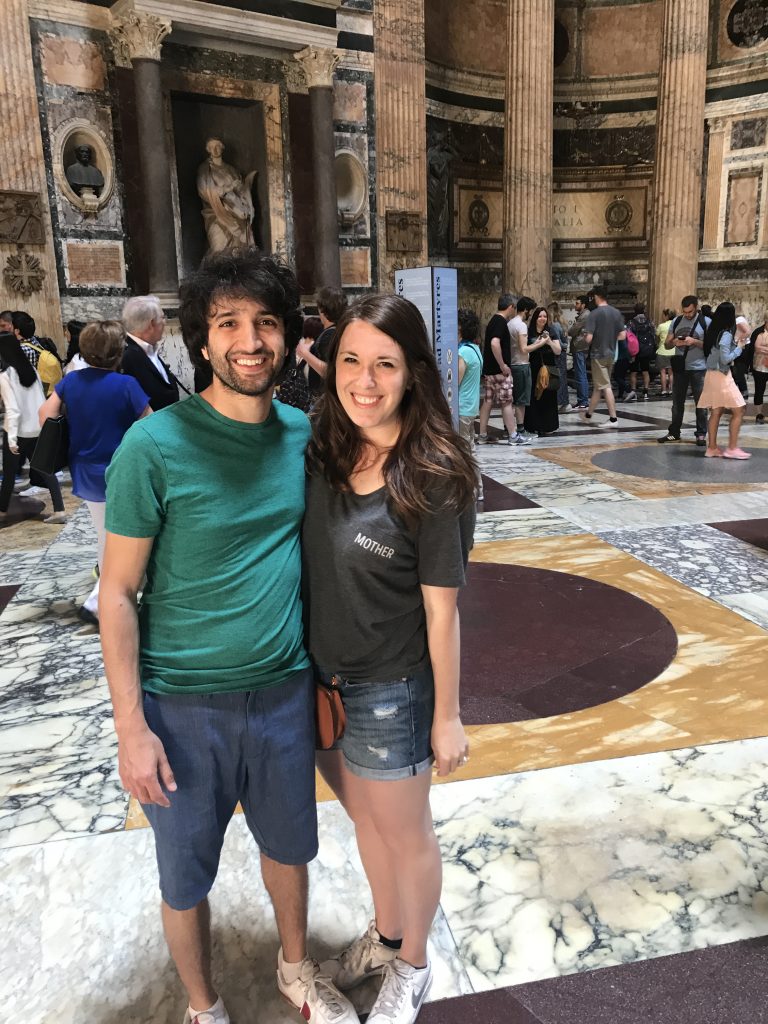 The chance to take in all this culture was amazing. Pictures do not do this place justice.  The ruins are remarkable, and witnessing a city that lives around its culture, building modern stores and restaurants in the cracks, is truly hard to describe without seeing it firsthand. But with hindsight, we would have swapped the two cities around–go to Rome first and then Positano.  After a week at the laid-back, gorgeous ocean views of the Amalfi Coast, the transition to city life, with its crowds of people and abundance of trash, was a bit jarring.   Oh well. Now we know 🙂

Other Italy posts: Positano Travel Guide // A day trip to Capri // Five Things You Should Know Before Booking a Trip to Italy 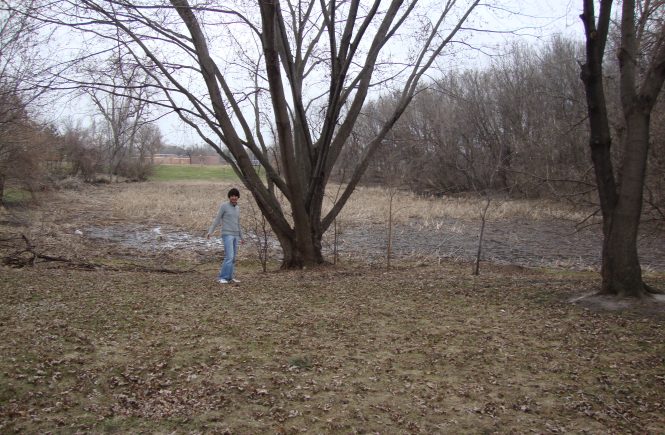 A Week of Dinners 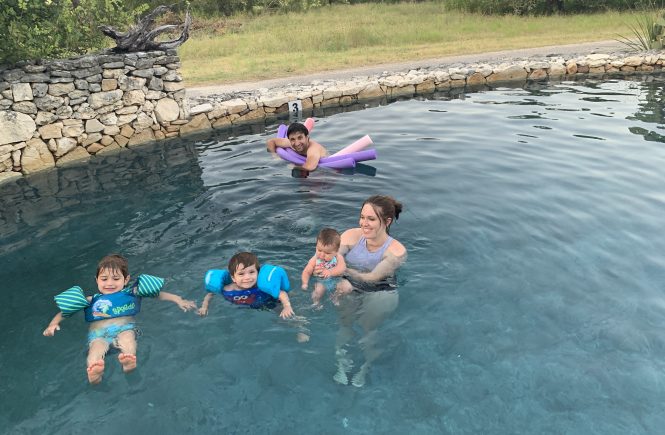