Every Saturday morning, JR jumps into our bed and says, “How big is the baby?”  (Ok, he’s usually already in our bed since he has a habit of sneaking into our bed in the middle of the night and laying at the end by Pancake so we don’t feel him in the bed right away and move him back).  After surcoming to the reality that I won’t be getting any more sleep, I pull up the two baby apps on my phone, and JR gets excited to see how the baby is now the size of some various fruit or vegetable.  He looks at the picture of the food, scrolls to see the baby in 3D, and talks about how the baby eats with the placenta.

Then one day I was at the grocery store, and I saw a pomegranate.  I was 17 weeks pregnant, and since we spent our morning gushing over the baby app, I remembered that the baby was the size of a pomegranate.  So I tossed it in my cart and brought it home to show the boys so they’d have a better idea of how big the baby currently was.  The boys carried it around for a while.  And then we ate it. 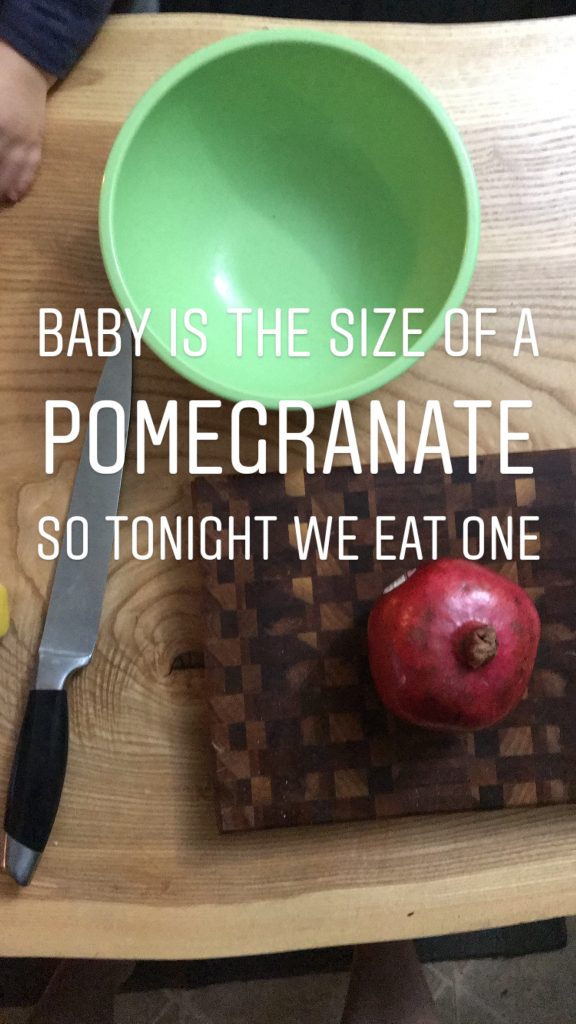 From then on, we started incorporating the “what size is the baby” food into our meal rotation.  We’ve had mangos, cantaloupe, cauliflower, grapefruit, pomegranates, and bananas.

And at 28 weeks, the baby was the size of an eggplant.  So we decided to eat an eggplant. 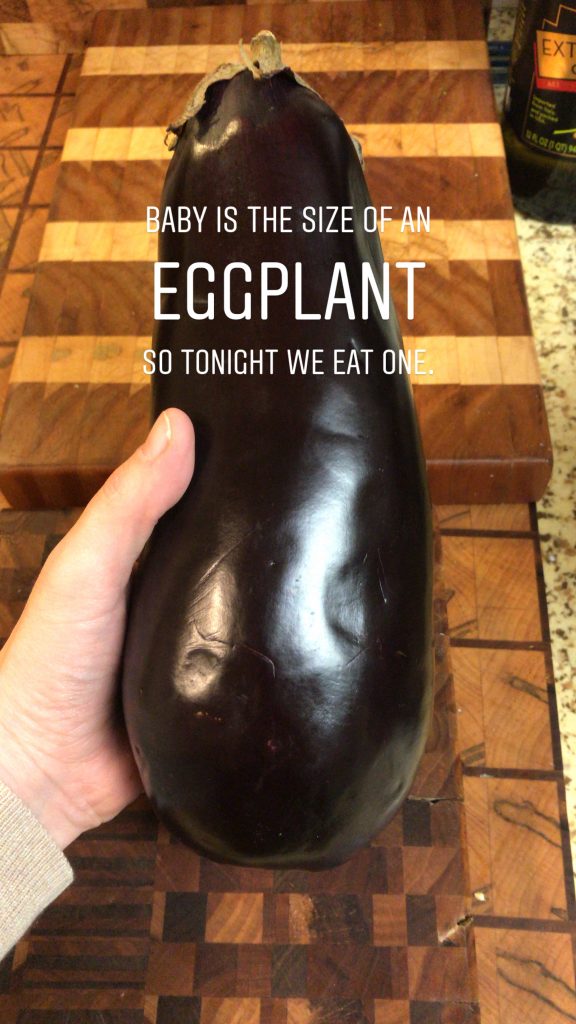 I had made eggplant parmesan many times.  Each time, I find a new recipe.  Each time, the meal is ok.  Until this time.  This time I finally found the perfect eggplant recipe!  Instead of using breadcrumbs or Panko, I used Corn Flakes.  This was a game changer.  Each eggplant slice was just crispy enough.  And since we had a block of leftover Parmesan cheese from Christmas, I shredded it instead of using pre-shredded cheese from a bag.  This was a good idea.  The cheese didn’t weigh down the eggplant or make it too soggy.  Instead it added a dash of salty, sweet element that mixed well with the dollop of sauce.

The meal was a success.  JR ate everything on his plate plus some.   Matt and Max were into it.  Now next time I make eggplant parmesan, it won’t start by me googing a new recipe.  I’ll make this one. 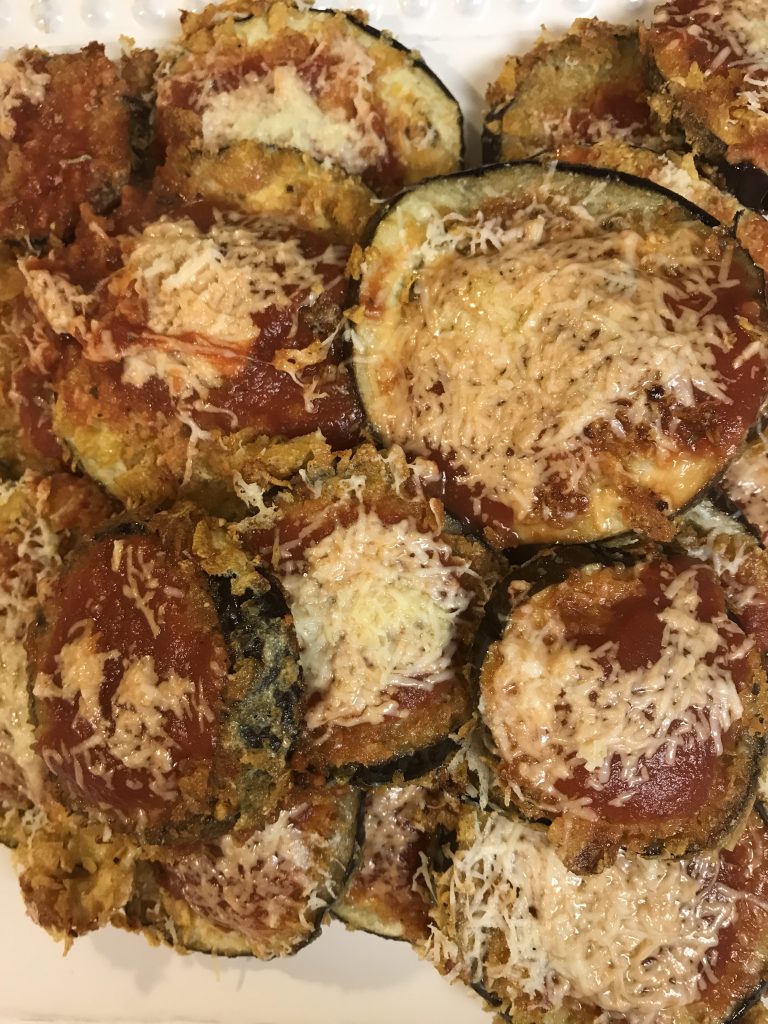 Modified from: The Seasoned Mom 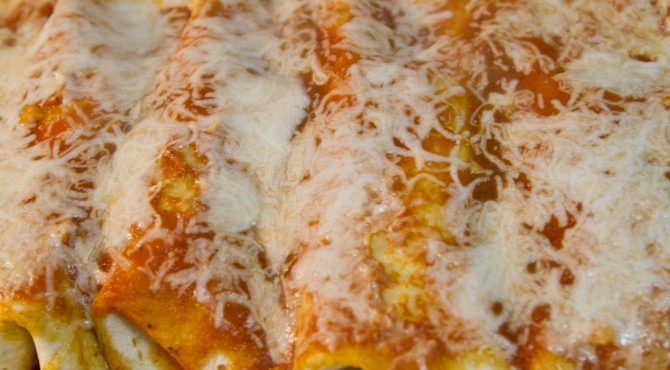 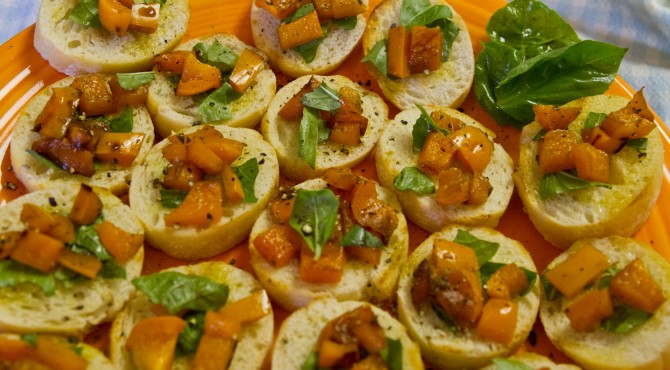 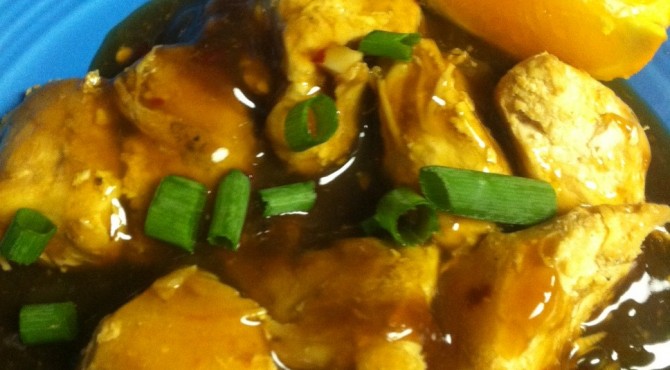